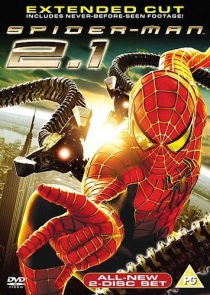 Shortly before the release of the new threequel, Spider-Man 2 returns to DVD in this newly extended form. What’s there? Not much.

There are bits so little you’ll think “I don’t remember that bit” (and it may just be a bit you’ve forgotten); there’s a new scene with MJ that’s OK but not mind-blowing; some added bits to fights; and an alternate version of The Lift Scene that is funny and (very) notably different, but just not as good as the original.

It’s still a 5-star film because it doesn’t ruin the original — but it’s not at all essential. The DVD has new extras, mind, so if that’s your thing (like me) it may be worth it.

In retrospect, I probably should have rated this lower. It may still be a good film, but the fact is the original cut’s better — even if just for the superior version of The Lift Scene. I rather doubt I’ll ever watch it again.