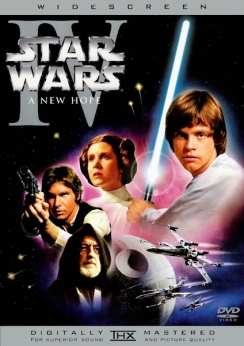 Much criticism has been made of Lucas deciding to modify the original trilogy for the 1997 re-release, and then further for the 2004 DVD release. It’s not necessarily unjustified, but it is sometimes picky. If Han shooting first bothered you, you may be a little pleased to know they now shoot at the same time.

There are a few other extremely minor changes from the ’97 version… sadly, though, not to the CGI: Jabba still looks dire, not even as good as the Episode I version — CGI that was five years old by the time of this release. The film itself is still a fun sci-fi-fantasy action/adventure, devoid of many problems that plague the new trilogy.

My thoughts on the Star Wars saga as a whole — including more detail on A New Hope — can be read here.