While my main quest this year has been to see 100 films I’ve never seen before by the end of 2007, I’ve obviously seen other films around this. One of these has been to watch all six Star Wars films in their narrative order, over a three-day weekend. This turned out to be the weekend just passed, from Friday 10th to Sunday 12th. This special entry documents my thoughts on the films when viewed back to back in such a way.

Of course, everyone knows that these films were made ‘back to front’, in that 4 to 6 were made from 1977 to 1983 and 1 to 3 were made from 1999 to 2005. One might argue that there are reasons for viewing a story in such an order (for example, Memento works because it’s back to front), but the fact that the films are numbered so suggests they should be watched that way. I’ve tried to view them with this in mind — not as two trilogies from 4 to 6 and 1 to 3, but as one continuous story across six films, 1 to 6. Hopefully my comments reflect this. To help bolster this illusion, I watched the first two on Friday, the next two on Saturday, and the final two on Sunday.

For the sake of clarification, the versions of 4 to 6 watched were the most recently remastered DVD releases, complete with all sorts of controversial changes. Details of them can be found on sites such as IMDb. 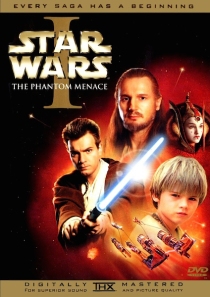 Everything you remember about Episode I is still true: the plot is too mired in political machinations, the dialogue is truly dire, the acting frequently wooden, the direction flat, and Jar Jar Binks is as annoying as ever. There are some good bits — the pod race is exciting and the four-way climax works, especially the excellent lightsaber battle. A lot of the CGI holds up remarkably well, but equally a lot of it wouldn’t pass muster for a computer game now.

If you’re a 10-year-old it all might be fine: you’ve grown up with CGI everywhere, you won’t notice the dialogue, most plots wash over you anyway, the action is cool, and you’re the same age as Anakin so you might not find him as whingeingly irritating. The Star Wars series would never have taken off (probably at all, let alone to the degree it has) if this had been the first entry we all saw.

Ten years on from Episode I and Anakin’s a fully fledged Jedi (almost), Padme’s a senator, and Obi-Wan has a beard. Episode II benefits from improved dialogue and performances. Unfortunately it’s still far from ideal — the overuse of CGI leaves much of it looking fake (this is, almost, an animated film with a few real actors in) and the first hour is blighted by a slow pace, too much plot, and the allegedly all-important love story in which Anakin and Padme fall in love because, well, the plot says they do.

There’s also a building sense of the connectedness of all the films… well, obviously, because the Clone Wars kick off here; but it also more subtly lays the groundwork for other plot and character developments. It’s a film still filled with flaws, but it still feels a lot better than the previous one in spite of them. 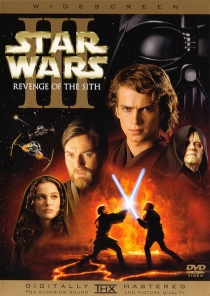 The sextet reaches its darkest point: Anakin turns to the Dark Side and slaughters the Jedi younglings before burning in the fires of Mustafar. It’s all very depressing. To the film’s credit, it doesn’t conclude; that’s to say, as the last film to be released you might’ve expected Lucas to bring things to a definite conclusion, but instead it ends with a sense that there’s more to come — exactly how things should be at the halfway point!

The rest of the film is a mixed bag. The opening and closing 25 minutes are action-filled excellence, all epic space battles and lightsaber duels; Obi-Wan vs. Anakin even manages to pack an emotional punch. But the Anakin-Padme love story still rings false, and the latter is wasted, sitting around in her apartments waiting for updates and then dying of Plot Implausibility. In trying to make Anakin a Complex and Divided character, Lucas instead makes him seem fickle and underwritten. The simpler, action/adventure-orientated characterisation of the later films is actually stronger and deeper.

But I’m getting ahead of myself: Revenge of the Sith is undoubtedly a better film than the two that precede it, but we all really know the best is yet to come. 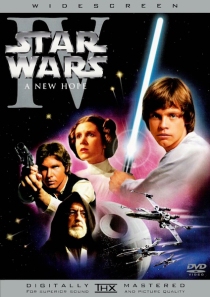 Here it is: the big crossover; the moment of truth. How does it fare? Pretty well, actually. A long time has passed since the dark finale of Episode III and there’s undoubtedly a lighter feel (despite the Empire being in control!) C-3PO and R2-D2 are onboard the ship from the end of Episode III, a useful visual link as things almost start over — it’s Luke’s story now, and, with a new actor as Obi-Wan, it’s only the droids and Darth Vader who are recognisable from before.

The events of the previous trilogy add weight to Guinness’ performance, as well as to the mythology that gets thrown about. Obi-Wan’s final duel may not be as visually stunning as the one on Mustafar, but there’s added emotion now we’ve seen the character develop. Real sets, costumes and models largely look better than CGI, though there are a few dodgy effects that you’d think they’d’ve fixed. Sadly, the CGI added in 1997 doesn’t seem to have been improved for the 2004 release, so things like Jabba look pretty dreadful; that said, its presence helps smooth the link between the trilogies, as does the music, a couple of plots (Obi-Wan vs. Vader; the Death Star) and some ship designs.

However, the biggest change is in tone: I to III present an epic fantasy story, full of wizard-like Jedi, intricate galactic politics, and ancient prophecies; by contrast, A New Hope is straight-up action/adventure, far more concerned with gunfights, tricky situations, exciting dogfights, and amusing banter than with whether the President has been granted too much executive power. It’s all the better for it — even without glossy CGI and choreographed lightsaber duels, this is by far the most fun film so far.

If anyone’s only seen the prequels they may be baffled why so many people love Star Wars. This is the answer.

There are a variety of elements in the series’ penultimate film that have a very different impact in light of what we’ve experienced in the first trilogy. The most obvious is the revelation that Vader is Luke’s father: it’s no longer a twist, of course, but the emotional impact on Luke still makes it an important moment. Yoda’s line, “There is another”, is less mysterious, as is Luke’s ability to telepathically alert Leia near the end. Thank God their kiss is only a brief moment of humour though!

Speaking of Yoda, he seems to have gone a little loopy after several decades alone on Dagobah; the odd little green puppet is quite far removed from the wise old CGI sage we’ve seen before. His first mention (by a ‘hallucination’ of Obi-Wan) is also far less mysterious considering we know who Yoda is.

The film finds itself lacking in the lightsaber duel department — after the long, complex fights of the prequels, the Luke/Vader duel looks decidedly weak; though, at the end of it, Vader exhibits characteristics which are very reminiscent of Anakin in Revenge of the Sith. Also, Han and Leia’s burgeoning romance is infinitely more believable than Anakin and Padme’s in only a fraction of the screen time.

With Yoda, Boba Fett, the Emperor and Jabba all cropping up, threads planted and grown in all four preceding films are coming together, and things are in place to be wrapped up in the concluding film…

Considering it’s the grand finale, it’s perhaps surprising that Episode VI is largely the lightest of all the films, filled with extra humour and all those cute little Ewoks. Personally, I like the Ewoks — they make me laugh, go “aww”, and it’s sad when they die! Yoda’s death is another sad moment, and even more so having seen him in full action in the first three films. The threat posed by the Emperor is also even more apparent, there’s more of a sense that Luke truly could follow in his father’s footsteps, and there’s added poetic irony in Darth Vader’s final decision — it is the same thing that caused him to turn to the Dark Side that saves him from it.

Here is also the biggest failing of the films as a single series, however: the prequel trilogy is endlessly obsessed with the prophecy about Anakin bringing balance to the Force; it isn’t mentioned once here. A dubbed line or added shot with Yoda saying something would’ve been nice. Instead, the major change at the end is adding Hayden Christensen over Sebastian Shaw. It’s a dreadful idea on paper… and so too in practice. He looks out of place and doesn’t at all match with the man we just saw die in Luke’s arms. Seeing celebrations across Bespin, Tatooine, Naboo and Coruscant neatly ties this right back to Episode I and shows the larger impact of the end of the Empire in what is an otherwise surprisingly brief and low-key post-victory epilogue.

Another thing worth a quick mention is the speederbike chase through the forests of Endor — one of the series’ very best action sequences, and all the more effective for being entirely practical instead of CGI. When all’s said and done, I think Jedi is actually the most underrated of all the films.

So, does it work?

As with most things it’s a case of yes and no. As I’m sure you’ve seen, my review of A New Hope covers many of my thoughts on the changeover between the two trilogies, and my comments on The Empire Strikes Back and Return of the Jedi elaborate on how things progress across the final two episodes. In short, it is, perhaps surprisingly, not the haircuts or quality of effects that really give away the change between the two trilogies, and the 28-year gap between Episodes III and IV; rather, it’s the dramatic shift in tone, away from epic fantasy into thrilling action/adventure. This is not a bad thing, but when viewed in order it leaves you longing for Yoda and Obi-Wan to start wittering away about the fulfillment of prophecies and whatnot at the end of Episode VI.

The other thing potentially bothering is how some of the original trilogy’s plot explanations come off, considering we’ve just seen them spelt out in almost seven hours of detail. Pretty well, as it turns out — most of Obi-Wan’s explanations to Luke are surprisingly brief, coming over more as gentle reminders to the audience, or at worst well-handled instances of those always-awkward cases of “Character X must be told Information Y that audience already knows”. There’s the odd reference that doesn’t quite gel with what we’ve seen (for an example, Leia having some vague memories of her birth mother) and the lightsaber duels aren’t up to the calibre of those in the new trilogy, but that’s hardly bothersome.

If you’re a fan of the films it’s an interesting exercise to watch them in this order, and I’d recommend giving it a go. If you know someone who’s never seen them before, especially if they’re young enough to not be aware that Vader is Luke’s father, I’d say they should still watch the original trilogy first — it may still be effective in numerical order, but nothing beats that as a shocking revelation!