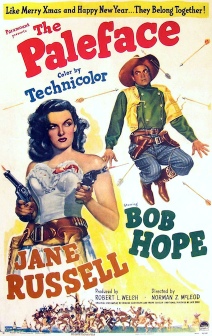 Bob Hope and Jane Russell star in this Wild West comedy, in which Calamity Jane (Russell) has to stop a group of men smuggling rifles to the Indians. It’s clearly designed as pure entertainment, mixing styles in a way no film would dare attempt today — there’s broad comedy, gunfights, horse chases, and even a song or two!

It works too. OK, so the direction may be a little flat and some of the comedy old fashioned… but it was made in the ’40s and there’s still a good number of laughs, so it seems churlish to complain.