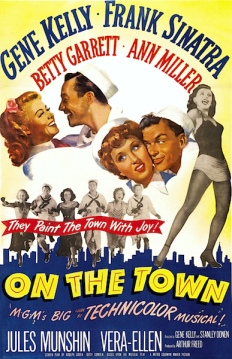 Gene Kelly and Frank Sinatra lead the cast in this musical comedy about three sailors who have 24 hours of shore leave in New York. The plot is sometimes predictable, but at least it’s not as standardised as many. Equally, none of the songs are truly memorable but most are fun while they last.

The humour may be quite gentle (though be prepared for some sexed-up female characters!), but as a whole it’s never less than entertaining (with the exception of a third act dance almost as incongruous as Oklahoma!’s change of cast). Several of those who watched it with me were surprised to find they actually enjoyed a musical.