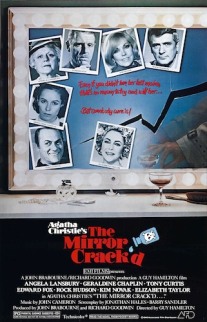 A star-studded cast and the director of Battle of Britain, Goldfinger and three other Bond films can’t raise this adaptation of an Agatha Christie Miss Marple mystery far above the level of an ’80s TV movie.

There are some good lines, and it’s a Christie so obviously the fundamental story is good, but the direction is flat and lacks suspense, half the cast phone in their performances, and Angela Lansbury, lumbered with a sprained ankle and premature aging, seems to be in a dry run for Murder, She Wrote. The lack of involvement by the main character is something I always find problematic with Marple stories, even when the actress involved has the necessary twinkle. Edward Fox is her match as the detective who actually does most of the detecting for once (but is still robbed of the final revelation, of course).

The best bit, which I’ll just take a moment to highlight, is the opening. It’s a black & white murder mystery, the scene of the final revelation… and the print burns up just before the killer is revealed. The film cuts to a village hall, where the film was being screened and the projector’s just died. Miss Marple proceeds to explain what will happen to everyone, based on what she’s deduced from the film so far. A man at the back who’s seen it confirms she’s right. Much better than my summary makes it sound, this is by far the film’s highlight, one of the few whole scenes that rises above the pervading flaws.

Despite a few commendable elements, this is a good tale that’s not told as well as it could be.