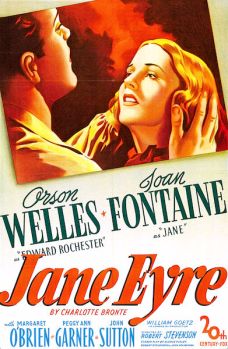 I was meant to read Jane Eyre in the first year of my degree, but, given a week to attempt what seemed a positively enormous tome (I partly blame the edition) and a coinciding essay deadline, I didn’t even attempt it. Instead I settled for a friend summarising it for me — I tuned out halfway through the very long retelling due to boredom, though whether that was the fault of the novel or its summariser I still don’t know. I finally got through Jane Eyre the year before last — not the novel, though, but the BBC’s apparently-definitive adaptation (has it been that long already!), following numerous extremely positive reviews at the time. That was good — because or in spite of the novel, I do not know.

And so I come to this version, made in the wake of Rebecca (ironically, a novel clearly inspired in part by Jane Eyre) and also starring Joan Fontaine, alongside Orson Welles as the brooding love interest, Rochester. Well, he’s supposed to be brooding, but as played by Welles he comes across as merely gruff, apparently with a slightly unusual fake tan. Despite a suitably dramatic entrance, Welles’ stilted and occasionally overplayed performance, as well as a lack of chemistry with the equally weak Fontaine, does nothing to liven up what is already a rather uninspired production. The first 20 minutes are, at best, a Dickens rip-off, though without the appropriate comeuppance for the villains; in this version, it’s less Dickens and more obscene Christian morality play, complete with flat performances and (obviously) an over-reliance on God.

This section moves slowly… and then so does the rest of the film. Considering I’m primarily comparing this hour-and-a-half version to a four-hour miniseries, that’s quite a feat. The plot’s twists and revelations are all sadly underplayed, removing much of their dramatic effect; the same can be said of the abrupt ending. Perhaps there was an assumption that the audience would already be familiar with them, but true or not their weakening helps ruin this interpretation. And that’s all without mentioning the atrocious French accent of Adele, Rochester’s young ward, which often sounds as much like a bad Welsh accent as a French one.

All round, then, a very poor effort. A handful of redeeming features (the odd nice bit of cinematography, brief flashes of some decent performances) keep it from quite sinking to the lowest mark.