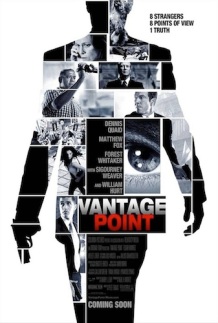 I don’t imagine you’ve missed the endless comparisons — every review seems to have them, IMDb’s single-line plot description mentions it, the film itself certainly pretends to be like it, and I imagine even the pitch to the studio went, “well, it’s like this Japanese film…”. But, in fact, it’s nothing like it, and here’s why: Rashomon is about four people who tell completely different versions of the same events, some or all of which are therefore untrue; Vantage Point repeatedly shows the same events from different angles, revealing a sliver of new information each time. There are no lies and no real misdirection; none of the characters interpret what they see, we’re just shown it from where they were standing. Nonetheless, it’s a potentially interesting way to construct a thriller, but Vantage Point doesn’t exploit the concept’s full potential.

And then, halfway through, it gives up on it.

At first it seems like the filmmakers have simply lumped the gang of terrorists together as one character for the purpose of their perspective, an example of typically uninsightful American action-thriller ideology. But it soon becomes clear that, instead of continuing the perspective-shifting high concept of the first half, the rest of the story is going to play out like a normal thriller. And suddenly it’s a lot more entertaining, freed of pointless repetition and an irritating tendency to stop each story at an appropriately cliffhanging moment. If only the whole film had been constructed this way! Yes, it would have lost out on the odd mystery and some revelations wouldn’t have been so spread out, but continually retelling the story to pull this off seems a cheap trick anyway. Not that it matters, as most of the twists are blatantly obvious, and possibly the biggest of all was blown in the trailer — and is glossed over in the film as if they expected you to have seen it there.

Of course, the already slim running time would be reduced to the length of an American TV episode if they edited it chronologically, because there are plentiful repeated shots of speeches, explosions and crowds running, as well as the over-egged ‘rewind’ sequence each time the chronology is reset, a trick that’s as pandered to an inattentive brain-dead audience as ever you’ve seen. Another reason for employing this disjointed wannabe-Rashomon style is that the timelines probably don’t add up: some characters seem to squeeze an awful lot into a couple of minutes before their plot has to sync with someone else’s, while others presumably stand around doing nothing now and then.

Ultimately it’s the much-reported attempt to be ‘Rashomon-like’ that really scuppered Vantage Point for me. It only manages the multiple perspectives trick until halfway through, and even then it’s not especially well executed. The style has clearly been foisted upon it to mask a story that isn’t that original — the plot is a bit like half a season of 24 on speed — but it could have made passable enough entertainment for 90 minutes, especially as there are a couple of half decent action sequences. As a straightforward thriller it might not have been a great deal better, but it would have been less disappointing.