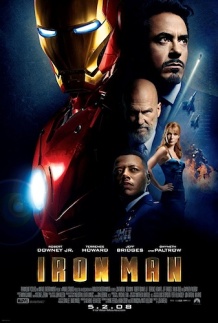 “Iron Man, Iron Man, does whatever an iron can. Flattens clothes, nice and smooth; burns a hole if he doesn’t move. Look out! Here comes the Iron Man!”

Irritating ‘humorous’ review intros aside, Iron Man has never been at the forefront of my comics experience. X-Men and Batman, yes yes yes; a few of Alan Moore’s, of course; a solid stab at getting through Preacher; occasional diversions into Spider-Man or Ghost Rider… But never Iron Man (or a slew of others, but they don’t have a surprisingly successful movie currently in cinemas). Whilst he’s obviously a popular character with fans, the film’s phenomenal success — both financially and critically — has rather taken me by surprise, and consequently dragged me to the cinema for the first time in over 10 months.

Tony Stark is, perhaps, Marvel’s answer to Bruce Wayne: the billionaire playboy CEO of a huge technology company who uses his technological know-how to become a superhero in the wake of personal tragedy — but in Stark’s case the company is an amoral weapons manufacturer and the playboy lifestyle isn’t just a front. What this means for the viewer is that, in the title role, Robert Downey Jr gets to shine. He has all the best lines and comedic moments (of which there are plenty) and a couple of cool action bits too (of which there are few). As he’s the hero this would seem just, but you only have to look at earlier entries in the Batman franchise to see how the hero can be sidelined for the villain. Elsewhere in the cast, Gwyneth Paltrow brings humanity to proceedings as the improbably named Pepper Potts, whose biggest flaw is that the filmmakers refuse to have anyone make a joke about her name. Not even one! Jeff Bridges gives a suitably dastardly performance as the eventual villain, but the plot woefully underuses him.

Because this is an origin story, you see, and sadly falls into most of the typical origin story traps: the ‘major’ villain exists only to provide a final act punch-up while the rest of the film explores how Ordinary Man (or Ordinary Rich Man in this case) gained Super Powers (or Built Super Suit) and went on to Save Mankind (or Save Some Foreigners, but I’ll leave deeper debates over the film’s dubious international perspective to others). It used to be the case that superheroes arrived on the screen ready to go — look at Burton’s original Batman, for example — but since the genre’s ’00s revival it’s all about the origins. What this typically means is a decent-enough first film that serves only to introduce the characters for the sake of a fully-formed second entry. One can only hope this will be the case with Iron Man.

The primary exception to this rule is Batman Begins, which succeeds because it’s less about the origin story and more an exploration of Batman’s psychology in general, something only vaguely alluded to in preceding efforts. Where Iron Man falters on this score is in completing Stark’s move from uncaring weapons manufacturer to socially conscious hero relatively early on, from which point he spends ages building his suit and battling, not an evil villain, but off-screen corporate machinations. The final fight, when it arrives, lacks punch (literally) and is over too soon. The amount of time, depth and humour awarded to the characters is to be applauded, but it comes at the expense of some excitement. At least it makes a change, as it’s thoroughly unusual to find the balance skewed that way.

To touch on an exceedingly minor element, the fan-pleasing post-credits scene with Samuel L. Jackson as Nick Fury is quite disappointing. While it’s cool to see Jackson as Fury, and a nice lead for the now-confirmed Avengers movie (which will come after Iron Man 2, so you have to wonder why the scene is at the end of this film), it’s too brief. When Fury informs Stark he’s not the only superhero in the world it provides a mixed reaction: on the one hand, we’re all too aware that from the Marvel Universe we’ve had three X-Mens, three Spider-Mans, a Daredevil, an Elektra, a Hulk (and soon another), a Punisher, and even a Ghost Rider — if they all take place in the same filmic universe then Stark ought to have noticed at least a couple of them on the news! And if they’re not in the same universe, one wonders if the cast of The Avengers movie will be padded with second-string heroes who barely warrant their own film. But that’s a debate for another review (one in three years’ time, in fact).

This may all sound a tad harsh on Iron Man, but when a film receives near unrelenting praise from most quarters it’s hard not to spy the faults when coming to it late. What it most resembles is a great TV pilot: at the end you enjoyed what you just saw, but your thoughts lie with what’s to come — “that’s the setup, now what will they do?” Hopefully Iron Man 2, due in two years, can take the many positive elements and run with them.