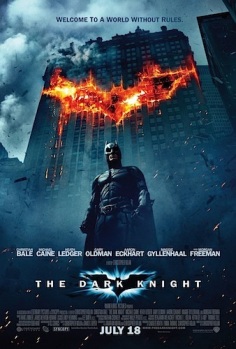 The Dark Knight — the sixth film in the modern Batman series (though not connected to the first four) — comes with a heavy weight of expectation on its back. It’s the sequel to the last film, Batman Begins, which relaunched the flailing series in style and is one of the best comic book movies ever — so Nolan and co had to top that. There was Heath Ledger’s death, a sad accident that has heaped extra focus on his penultimate performance here (his final one, in The Imaginarium of Doctor Parnassus, is currently in post-production with no release date) — especially as some sources cited his appropriation of the Joker’s mindset as related to his death. And then there were the trailers too, which caused ridiculous levels of excitement among some — personally, I found them a tad lacking. But I was fairly confident that, a bit like Begins, The Dark Knight would turn out to be the sort of film that doesn’t necessarily trail all that well but is excellent when seen.

And I was right. In this respect, it’s because the action sequences aren’t the point of the film. They occur when required by the story, while still being well-spaced and appropriately exciting, rather than serving as check-boxes for a plot designed primarily to link them together — the latter being what most blockbusters seem to settle for these days. Many are pleasantly old-school in style, the stunts performed largely for real, and at least one major example is even left without music. On the odd occasion when effects must have been used, they’re seamlessly achieved. The most obvious use of CGI — which I won’t describe for the sake of spoilers, though many will already know about — is incredibly well done. All of this helps ground the film in a perhaps-surprising (for some) degree of reality, one that goes far beyond what other ‘realistic’ superhero movies have strived for.

In fact, this realism is probably The Dark Knight‘s main strength. Obviously there’s never going to be a real city where a billionaire dressed in bat-inspired armour protects the populace from a deranged man in clown make-up, but if there were then this is how it would be. Where Burton’s two Bat-films were “dark”, and Schumacher’s were “gaudy” (or “crap”), Nolan’s pair are “real”. It’s an excellent thriller as well as everything else. The focus of the plot — at least at first — is on the mob and their control over Gotham, and it’s from their criminal desires — plus the very existence of Batman — that the Joker grows. Ledger’s performance is as outstanding as you’ll have heard said elsewhere, and while it still feels like a supporting role it receives more attention than the psychology of Bruce Wayne/Batman — which, considering that’s what Batman Begins focused on, seems fair enough. Every other performance is equally as flawless (I’ll name names in a moment), but it’s Ledger’s disturbing, engrossing turn that will stay with you. He is the Joker, in a way Jack Nicholson certainly never was, and — among obviously more upsetting effects of his premature death — the fact we’ll never see him in a rematch is a huge shame.

As Harvey Dent, Aaron Eckhart’s role is much larger than I was expecting. The floating-head posters that seemed to divide the film between him, the Joker and Batman are spot on — they’re the three central characters, everything revolves around them, their actions, choices, and emotions. While Ledger may dominate with his (appropriate) theatricality, Eckhart is more the heart of the film, with a genuinely tragic story. Viewed in this light, the order of the film’s final scenes — which I think some may see as incorrectly balanced, perhaps even anticlimactic — make all the more sense. However, I don’t mean to undersell the rest of the cast by highlighting Ledger and Eckhart — in their supporting parts, Michael Caine, Maggie Gyllenhaal, and especially Gary Oldman and Morgan Freeman, all do brilliant work. The talented Christian Bale manages to hold his own as the ambiguously heroic crimefighter, even against the more obviously attention-grabbing performances of Ledger and Eckhart.

As with other superior superhero sequels like X2 or Spider-Man 2, The Dark Knight uses the groundwork of its successful predecessor to craft an experience that’s even greater. In fact, there’s an awful lot more that could be said about the qualities of The Dark Knight. At two-and-a-half hours, it’s a packed epic of a movie — which makes Nolan’s confident juggling of plot threads, character development, several large performances, action sequences, and more, all the more impressive. I certainly enjoyed seeing it with a large, American (importantly), opening-weekend crowd — several moments produced whoops and sustained applause from the audience, as well as a good number of well-deserved laughs.

The Dark Knight is great entertainment, with a good deal of meat on its bones too — the performances and emotional stories are as engrossing as the thriller-ish plot and impressive action. When all is considered, it’s possibly as perfect a thriller/blockbuster as they come. In fact, as I publish this, The Dark Knight sits at #1 — the best film of all time ever — on IMDb. It will drop, of course, because that’s opening-weekend fan-led gut reaction for you… but, even when time’s passed, I’m certain it deserves to remain high on the list.

Sadly (though not surprisingly) the Manhattan IMAX was booked solid all through opening weekend (and most of next week, at least). As soon as I manage to see it on the extra-big screen, I’ll share my thoughts here. You can also read even more of my thoughts on the film (this time when considered next to Batman Begins) here.

The Dark Knight placed 1st on my list of The Ten Best Films I Saw For the First Time in 2008, which can be read in full here.