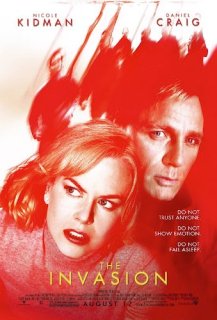 The Invasion is a modern thriller aimed at a mainstream audience, which naturally means it begins at the end. Is there a reason for this? As is too often the case these days, no. The only explanation I could come up with is that such an opening suggests there’ll eventually be some some actual scares in this sci-fi/horror, and so is designed to help the viewer persevere through the distinctly lacking film that follows.

Things go sharply down hill from the lacklustre opening ending opening: Jeremy Northam accidentally stabs himself with an Evil Alien Parasite Thing in a blatant genre convention that seems to have moved from the “necessary to get on with the plot” to the “badly obvious cliché”. The order of scenes that follow seems to be a random mess — for example, Nicole Kidman’s kid, Olly, begins to have nightmares again; a few scenes later, his dad (Northam, now taken over by the Evil Alien Parasite Thing) phones wanting to see him after a long absence; a few scenes later, Kidman tells a friend that Olly’s nightmares restarted after he was told he was going to see his dad. This is not an isolated example.

Much of the dialogue is on the level of bad exposition, but, to rub salt in the wound, it explains things we’ve already been shown. Normally reliable actors turn in flat performances with such an awkward script, which ponderously works its way through a plot that’s far too slow-moving considering how obvious it is. We know it’s an Evil Alien Parasite Thing within the opening minutes and even a passing familiarity with the genre will let you know how things are going to end up (as if opening with the ending didn’t give you a hint), but we’re still treated to near-endless scenes of our luckily-immune heroes trying to work out why everyone else is behaving oddly. It takes a full 36 minutes for Kidman to finally realise what we’ve all known from the start, but just in case you’ve missed the bleeding obvious there’s a pile of handy flashbacks. More to the point, how come only two people in the entire world (the other being Daniel Craig) have noticed what’s going on? The possessed have all the subtlety of a Jeremy Clarkson joke, walking around in a permanent mechanical daze.

A lot of articles have noted that the studio disliked how the film ended and so brought in other writers and director(s) to re-shoot the final act, aiming to bolster the action. Thank goodness they did, because it’s at this point that there’s finally something worth watching. The aliens’ dominance is a near-inevitable and obvious eventuality from very early on, and so structurally speaking should have been reached sooner. Unfortunately, when it does arrive, the weak early scenes mean we don’t care about the characters, so while some of the more action-packed scenes are well staged they have little genuine impact. Some good moments sneak through though, like a couple’s very public suicide, or… No, that was the only one I noted.

In this structural imbalance The Invasion is reminiscent of I Am Legend: a ponderous dramatic first half turns into an all-action assault as the only uninfected people are relentlessly pursued by the infected majority. In an inversion of the disappointing (but not dreadful) Will Smith vehicle, The Invasion‘s first half is dire while the second at least has some excitement and jeopardy. In Legend it was a shame that they couldn’t keep the first half running for the rest of the film; here you’re glad the studio intervened and forced some actual events on the film. It would be quite interesting to see how it was all meant to turn out originally, but I doubt it would be entertaining in the slightest.

Once it’s all over there’s a truly dreadful info-dump that explains what happened next. Besides making you cringe and wonder how a piece of exposition so blatant could ever have been greenlit, all it achieves is the delivery of a killer blow — not by blatantly stating the film’s subtext (which it does — not so ‘sub’ then), but with what that subtext actually is: when humanity is taken over by aliens, war stops; ergo, war is what makes us human. Lovely.

The Invasion featured on my list of The Five Worst Films I Saw in 2008, which can be read in full here.