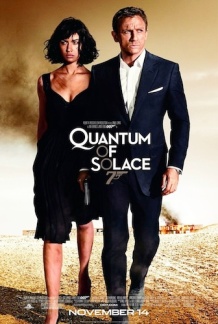 Quantum of Solace is to Casino Royale what Tomorrow Never Dies was to GoldenEye: it’s the second film of a new Bond, tasked with revitalising a flagging franchise (this time creatively rather than monetarily); it’s been promoted as shorter (though by 38 minutes, not TND’s mere 11) and more action-packed; and it’s got to follow a huge success, both critically (94% on Rotten Tomatoes) and commercially ($588m worldwide). It’s a tall order — one many believe TND failed to live up to (personally, I’ve always liked it). Does QoS do any better?

Well, it’s certainly action-packed. Bond hurtles from budget-blowing sequence to budget-blowing sequence with alarming fervour, the camera literally struggling to keep up. It’s this zoomed-in, over-cut, handheld style that most grates with me during these sequences. I quite like it in the Bourne films — it’s part of their style; it fits — but I was incredibly glad to not find it in Casino Royale, and therefore disappointed to see it showing up here. Compare Royale’s early free running chase to the early rooftop one in QoS and you’ll quickly see not only which is better staged, but which is better shot. There are some good moments action-wise — for every disappointing boat or plane battle there’s an effective duel (swinging from scaffolding) or a destructive car chase — but I do wish someone would put the camera on a tripod. The frequency of such sequences, plus an abundance of other common action/spy movie tropes (a rogue agent, shadowy organisations, moles — in fact, trust has never been more of an issue), suggest that this is very much the Action Movie on director Marc Forster’s increasingly eclectic CV. His true strengths show up elsewhere however, as the most memorable parts of the film aren’t the headache-inducing punch-ups, but any scene that involved Bond and M or Bond and Mathis.

The acting, you see, is of a high standard, certainly above the requirements of the genre. While Craig may be lumbered with a very focussed, almost one-note Bond, the flashes of drama and dark humour allow him the odd chance to stretch. He may not get the variety that Casino Royale offered in this department, but he does enough with what’s there. Never more so than in the scenes with Giancarlo Giannini’s Mathis — the action pauses for breath when Bond seeks him out, and we’re treated to some of the film’s very best bits. Some fans wondered how the character could be brought back after Casino Royale, and the trick is to transform his role: what was previously a minor part designed to facilitate the plot here becomes one of unique significance, an injection of emotion and humour that makes his unfortunate death the film’s most heartbreaking moment — in fact, I might go so far as to argue it’s the saddest moment in a Bond film since the end of On Her Majesty’s Secret Service. It’s these scenes that allow Forster’s dramatic directorial abilities to come to the fore, confirming that this is where his true talent lies.

Best of all is Dame Judi Dench, unsurprisingly excellent as ever. She’s aided considerably by M having a much bigger part this time out — not in an obvious The World Is Not Enough-style “have her kidnapped” kind of way, but just by giving her a lot more to do as James’ boss. In the old days the boss sending an agent out into the field and not hearing from him again until the mission was over may have made sense, but in our world of easy telecommunication it would be ridiculous if M wasn’t closely monitoring and commanding Bond every step of the way. So she does, and it’s great for the viewer to be treated to so much of Dench and her relationship with Craig. Not only that, but M has a spot of governmental and inter-agency politics to deal with too, increasing her role still further. If they retain any element of QoS for Bond 23, I hope it’s this.

As for the other Bond girls, Olga Kurylenko is fine but unmemorable, perhaps most significant for being the only major Bond girl who doesn’t sleep with our hero. (Incidentally, this is the third action film in two years in which Kurylenko plays a major part and doesn’t sleep with the hero. That’s quite a niche to be carving.) Back-up girl Gemma Arterton is disappointingly underused, existing primarily for the sake of being another girl in an otherwise masculine film. Her Goldfinger-tribute death, a nice nod in a franchise that has almost entirely excised its past, is an effective touch in and of itself (aficionados will surely note that, this time, there’s no conveniently-placed cushion), but considering the substance at stake turns out to be water rather than oil, it’s either Quantum playing some misplaced guessing game or an ill-considered plot hole. More annoying is her name, however. I don’t care that she’s named Strawberry Fields — it’s either an appropriately silly Bond girl name or, in this day and age, depressingly believable — but much is made of her first name going unrevealed, only to be rewarded with no pay-off. It’s not revealed on screen (only in the end credits), and Bond doesn’t even have an (admittedly clichéd) “I never even knew her first name” line on finding her body. Only a minor misstep, to be sure, but a nagging one.

As the scheming villain-by-proxy, Dominic Greene, Mathieu Amalric feels underused. He’s not as non-present as some Bond villains (The Spy Who Loved Me comes to mind, where Bond shares all of three lines with his nemesis before shooting him), but there’s a definite sense that the military coup/water hoarding storyline is a perfunctory element around Bond’s hunt for the men behind Vesper, in the process establishing Quantum so they can be dealt with in a later film. While I like having a Big Bad Organisation to cross over the films, much as SPECTRE did in the early days, the downside to their first real appearance here is that this particular scheme — a coup in a relatively inconsequential country, it must be said — is a bit lightweight for such a powerful, important organisation. This, plus Greene being more of a civil servant-type figure than an evil megalomaniac, leaves the climax feeling rather anticlimactic, lacking both the grandeur of the old Bond and the emotional weight of Casino Royale (as if a sinking building wasn’t quite grand!) It’s been touted in interviews that Greene’s fighting style is that of “a man who can’t fight”, but that’s no reasonable excuse for his final duel with Bond being so brief. Try harder next time.

Which, it seems, has been the closing impression of QoS for many fans. In this vein, placing the famous gunbarrel at the film’s close is surely highly symbolic, in the same way that saving the equally famous theme music for the end of Casino Royale was: Bond has now completed his evolution, excised his Vesper-demons, and is now the character we all know. Where at the start of the film he merrily kills everyone he comes across, at the end, face to face with the man mostly directly responsible for Vesper’s suicide, who he’s spent most of the film tracking down, he questions him before handing him over to MI6. For all those who dislike QoS’s style, this closing gunbarrel is hopefully an indication that, come 2011, the Bond they know will be back.

So does QoS do any better than Tomorrow Never Dies? Critically, yes, actually — although it’s received mixed reviews, they’ve been positive overall. At the box office, very much so, including the franchise’s best-ever US opening weekend (in this case topping the widely-disliked Die Another Day, something Casino Royale didn’t even manage). As for me, the opinion that opened my initial thoughts on the film still stands: it’s not as good as Casino Royale, but that was a far above average piece of entertainment. QoS isn’t a great Bond film, and it certainly doesn’t have the cross-fandom appeal that Brosnan at his best managed — and it certainly does have more than its fair share of detractors — but it’s a solid entry in the series. When the preceding instalment was possibly the best the franchise has produced in its 46-year history, that can make things seem worse than they are.

My initial thoughts also offer additional comments on the level of humour, the title sequence, and more.