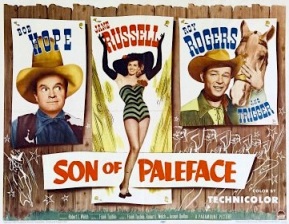 A sequel to 1948’s The Paleface only in the sense that it features Bob Hope in a Western setting, this time playing the son of his character from the first film.

Much of it is only gently funny and likely to try the patience of an unforgiving audience, despite the addition of “King of the Cowboys” Roy Rogers to returning stars Hope and Jane Russell. Between them the three manage to deliver some songs too, but the only memorable one is a reiteration of Buttons and Bows from the first film.

Things improve as the film goes on though. It slowly morphs into a live-action cartoon, in the process becoming a lot funnier and, in recreating the style of cartoons, technically impressive too. That the comedy is genuinely entertaining when Son of Paleface finally reaches these sections makes it a shame it takes so much time — and viewer persistence — to get there.