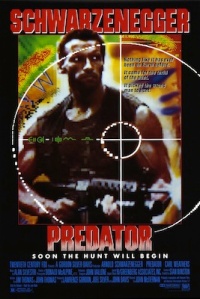 Let’s not pretend here: although the series have become intrinsically linked, Predator is Alien’s poorer cousin. Not that it’s a bad film — it’s an entertaining war flick that turns into a sci-fi/action/horror skirmish thingy — but it doesn’t have the same finesse that imbues Alien and its sequel.

In the lead role, Arnie does his usual macho posturing. Around him, a crack team of special-operations soldiers are characterised enough to be distinguishable but little more. There’s a girl because there should be a girl, not that she does much. Mainly, there are a couple of big fights and one seriously ugly alien.

The main reason for Predator’s success may well be the Predator itself. It’s a fantastic bit of design and animatronics that easily stands up today, its disgusting mouth perhaps not as iconic as the Alien’s phallic extra one but arguably more gruesome to look at. It works differently too: a solo intelligent hunter that is picking off our human heroes and is always one step ahead. Much of the same could be said of Alien’s Alien, but that was like a beast stalking its prey, while the Predator is more like a man hunting some rats. Where Aliens felt like a natural evolution of the former franchise’s concept — more of them! — Predators seems like a rather ill-conceived idea.

Still, there’s plenty of visceral enjoyment to be had from Predator’s straightforward approach, which is more than can be said for its sequel…