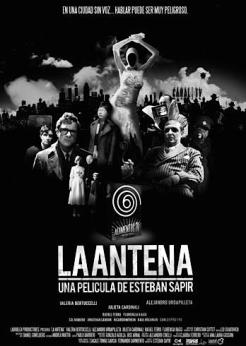 La Antena is a Silent Film. And by that I mean there is no dialogue, though there is music, and it’s in black and white with low-budget (looking, at least) effects, though it was made in the 21st Century — but it is entirely in the style of those films made in the era before sound was technically possible. It could sit comfortably alongside ‘real’ silent films to the extent that the uninitiated might reasonably be fooled into believing it was one.

In some respects this is neither here nor there, though it will undoubtedly put some viewers off. For those with a more open mind or who are fans of silent movies, however, it’s a joy. This is mainly because it’s incredibly imaginative, especially with its visuals, which are often pleasantly barmy. The setting is a dystopian future (or alternate reality) where people can no longer speak (thus justifying the silent film styling), and this world is wonderfully realised without a hint of realism or awkward attempts to explain why things are the way they are. These days it’s a rare filmmaker who doesn’t feel the need to explain everything and make it fit in relation to our world, but Sapir is one of the few who trusts us to accept what’s going on — much as the great silent film directors did.

Sadly it isn’t flawless. Some elements of the plot get forgotten as things roll on (what happened to Mr TV’s son, for example?), perhaps a victim of the 50 minutes of cuts they chose to make for pace. Most of the symbolism is also fairly heavy handed, though one could argue that’s in keeping with the style, and at least means it’s all nicely noticeable. Even then a few bits are unavoidably leaden — particularly, the use of the swastika and Star of David felt uncomfortably irreverent to me.

Ratings-wise, La Antena is borderline — the sort of film I give four stars to now but then beats most five-star films to a high place on my year-end top ten (like The Prestige or Hellboy II or the five others that have done it). In which case it seems only fair to run the risk of awarding it full marks.

Oscar-winning modern silent movie The Artist is on BBC Two tonight, Saturday 24th January 2015, at 10pm, and is reviewed here.