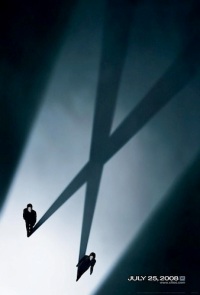 Six years after the once-phenomenal TV series meandered to an inconclusive conclusion, Mulder and Scully were back at the cinema, a decade on from their previous between-seasons big screen outing. The big threat this time was not aliens, however; nor even something more Earthly supernatural; but rather, where they would find an audience? There are now kids old enough to watch this in a BBFC-endorsed fashion who weren’t even born when the series started, and that’s not to mention the misguided attempt to pitch this as a Summer blockbuster.

And if there’s one thing I Want to Believe isn’t it’s a Summer blockbuster, which its snowbound setting arguably gives away to even the most casual observer, while its lack of action sequences and focus on spooky goings-on and character relationships — not to mention that none of these characters are requisitely young enough to head up a typical Summer Movie — should have been the clue to studio execs. And, unsurprisingly, the release strategy failed, leaving audiences either disappointed or not even turning up. As with so many perceived flops these days, it seems to me, I Want to Believe didn’t actually flop: off a $30m budget it made $68m worldwide. Though as only $21m came from the US, where the consideration of box office stats is often highly self-centred, it’s easy to see why many believe it did. Such perception, coupled with poor reviews and that problem of finding an audience, may mean there’s not a third movie, which seems a shame with 2012 on the horizon — quite nice timing for a (last-ever, I should think) instalment.

But let’s return to the issue of how this film was perceived, because I think that’s key to why it was so poorly received. The problem here is that it’s an X Files movie; not because there’s anything wrong with another film for that series, and not because it’s a bad version of The X Files, but because that title carries certain expectations — not only from fans but, with greater relevance to any widespread success, from the general public. Witness the IMDb thread entitled “Where the F were the aliens”, for example. Were this just an entirely standalone supernatural-tinged thriller — and consequently released in a sensible non-Summer slot — it probably would’ve gone down a bit better.

As it actually stands, I Want to Believe is not the kind of X Files most people were expecting — i.e. Something To Do With Aliens, and it’s no spoiler to say that there’s not a single one to be seen — forgetting that the series was never just about extraterrestrials. The idea that I Want to Believe was a bit rubbish and thoroughly disappointing is consequently as much (if not more) the fault of those viewers and reviewers who expected a different kind of film and didn’t get it. That said, it’s a shame that I Want to Believe isn’t wholly successful as the kind of film it’s trying to be either: on the surface, a standalone low-key supernatural thriller — though it fails to explore or explain its fantastical and scientific ideas as fully as one would like, particularly during its lacklustre (anti-)climax — but one that also tackles issues of moving on, obsession and belief, and how they can impact on a relationship — though with all the weight you’d expect in the belated sequel to a sci-fi TV spin-off.

Mainly, however, it’s about belief. The examples of this are too numerous to mention, but a clear one is the subplot involving Scully’s fight to treat a terminally ill boy. The thread bears little relation to the main supernatural plot, which was another point of confusion for many viewers, but if you consider the film as a commentary on and examination of the various forms and merits of belief it begins to slot in a lot better. Perhaps this is another case of a filmmaker attempting something beyond what audiences were expecting to invest in terms of intelligence, although if one accepts it’s there and a significant part of the film it probably begins to pale as a relatively light and underdone exercise. Still, it’s hard to deny that belief is the film’s central theme, which pleasantly turns the title from a generic catchphrase from the series, as it initially appeared, to a none-more-appropriate moniker.

Perhaps distracted by his thematic intents, writer-director Carter rushes some plot points, though he may also be limited by budget constraints and the need to make a distinctly R-flavoured movie hit PG-13. While the Director’s Cut adds three-and-a-half minutes of material, which Duchovny asserts is mainly gore that was cut to avoid an R certificate in cinemas (full details of which can be found here), there’s still nothing that looks as if it would’ve been out of place on conservative US network television, and obviously no effort has been made to give the main plot some breathing space.

The same goes for the guest cast, most of whom are thoroughly underused. Billy Connelly makes a good show of it, but Amanda Peet’s FBI agent has much unfulfilled potential. Yet at other points Carter lets things spool out comfortably — too comfortably, some might argue. One of these places is the relationship scenes between the two leads. The amount of attention lavished on this might lend credence to a theory that the film is as much about a pair of ostensibly retired paranormal investigators as it is this particular case, and through that again a consideration of obsession and belief.

The large amount of time spent on Mulder and Scully’s relationship fortunately doesn’t turn the film into an effort solely for the benefit of ‘shippers’. There’s definite space here for a portrait of two people in a relationship who have tried to move on from their old life but just can’t, and at times I Want to Believe does achieve such lofty aims. Little nuggets of information — such as the fact they’re even in a relationship, or that they once had a child together — drop in almost from nowhere in a way that undoubtedly sounds just like dialogue to a knowledgeable fan, but to a more casual viewer works as a slow uncovering of these two characters. Unfortunately such quality is fitful, especially as the movie goes on, and while the nine-seasons-and-one-movie of backstory initially just add depth if you know about them, it’s some time before the sudden and underwhelming climax that it feels they’re dictating events a little too much. What was shaping up to be a workably standalone depiction of two characters almost becomes just a status update on Mulder and Scully.

And here lies the rub: at times, the Second X Files Movie gets too caught up in being just that. There’s nothing wrong with that per se, but it could do with remembering it’s a Movie and not just another X File — especially if it wants to find any new (or even lapsed) viewers. When Assistant Director Skinner turns up it’s the final nail in the coffin for any shot at independence. As a fan, it’s impossible to begrudge a brief but heroic last-minute appearance from Mulder and Scully’s long-time ally, but as an objective viewer, he’s just some bloke who turns up with no introduction just in time to play a major role in the climax. It’s a misstep that, along with an accumulation of others, seriously damages the film.

But does an X Files movie need to be independent? Should nine seasons (and one movie) of backstory be ignored? Well, yes and no. There’s nothing wrong with making a “where are they now?” fan-pleasing reunion, but that would belong on TV with the bulk of the thing being commemorated. In the cinema, six years distant and billed as a standalone tale (note that it’s not even The X Files 2: I Want to Believe, never mind The X Files 204: I Want to Believe), it ought to stand on its own two feet and work entirely as a self-contained piece of drama. That it fails in this is perhaps the most disappointing aspect of all for me: it makes it infinitely harder to defend this as a supernatural thriller that deserves to be judged entirely on its own terms, rather than with some established knowledge of what The X Files ‘is’, when the makers are relying on those self-same established notions to tell their story.

Never mind finding an allusive audience, this is the film’s real battle: when Carter gets too caught up in making The Second X Files Movie, shifting what’s working well as both The X Files and A Movie into straight-up An X Files Movie territory. It’s this failure to be independent — not to the point of ignoring the series’ backstory, I should clarify, but to a point where this film can be wholly appreciated without ever seeing The X Files — that ultimately holds I Want to Believe back from becoming a great horror/thriller/drama movie in its own right. It’s frustrating because so often Carter comes tantalisingly close to fulfilling such ambitions, and if he had I’d have no qualms about defending this movie as an underrated (though, it is), misunderstood (though, it is) and independent supernatural-flavoured drama. Sadly, however, I think I just want to believe it is.

The X Files: I Want to Believe premieres on Sky Movies Premiere tonight at 9:45pm, then at various times throughout the week. It’s probably the theatrical cut, but who can say?