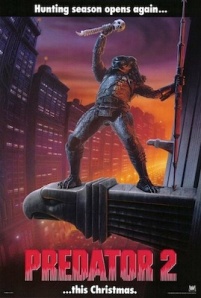 I’ve been looking forward to Predator 2 for a number of years after a friend told me that, despite its poor critical standing, it’s actually a jolly good film. (“A number of years” is the average time it takes me to act on such a recommendation; and, knowing this particular friend, “jolly” was probably not the word he used.)

Here, action director extraordinaire John McTiernan hands the reigns over to Brit Stephen Hopkins (probably best to be remembered for helming half of 24’s phenomenal first season, though you can recall the Lost in Space film and A Nightmare on Elm Street 5 instead if you like) and the action is moved from a jungle to the concrete jungle (see what they did there?) of LA, in the near-future year of 1997. Made in 1990, Predator 2 is set in the future for no good reason — sure, there’s a big gang problem, but this is fiction, you can set it now and still make up things like a huge city-affecting change in the status quo; and that way you don’t have to have silly semi-sci-fi guns either. Not to mention the fact that before too long it seems like they’d rather forget this is the ‘future’ and just get on with things. In the end, all it does is seriously date the film: in almost every facet, from screenplay to costumes to direction, it feels more like 1987 than 1997.

Sadly, this isn’t where the problems end. Out of four Aliens and two Predators, this has to be the only one that doesn’t bother in the slightest with a slow build up of tension. Sure, Alien Resurrection gives us the actual aliens much earlier than the others, but they’re not really in force for a fair old while. Predator 2, on the other hand, opens in the middle of a gunfight that lasts for the next ten minutes, and there’s a second before the half hour. This isn’t necessarily a problem in itself but there’s nothing inspired about any of it, especially the gang drug war plot that provides most of the focus.

It’s a shame this fails so miserably, because the franchise re-location is actually a commendable thing. I’ve talked a few times about the Alien sequels dramatically switching genres, but Predator 2 leaves them looking as if they couldn’t be more alike. Where Predator is a behind-enemy-lines/covert mission/jungle/war actioner, Predator 2 is an urban drugs crime police, erm, actioner… though both with a sci-fi twist, obviously. But the vastly different settings and setups mean that, even with the involvement of the same sneaky alien hunter, the films have a vastly different feel too. It’s just a shame Predator 2’s “urban jungle” concept is so poorly executed… for a while anyway, because when it finally reaches the 30-minute climax things suddenly get quite good.

It’s a bit like all the time, effort and money went on creating a good lengthy climax, then any-old hour-long urban crime movie was bolted on the front to create something feature-length. In fairness there are some good bits earlier on, but the final half-hour (or so) feel like it’s from a slightly different, slightly better movie. The dialogue improves, suddenly filled with some decent lines, and it centres on a mano-a-mano (or mano-a-alien, really) fight that’s nicely reminiscent of the first film while being totally different, sprawling through locations and using lots of high technology. There are still flaws — it nicks the government agents’ motivation from Alien wholesale (they want to capture the alien for its weapons technology, which they admire it for) — but they’re largely forgivable.

Perhaps best of all is that throughout the climax it expands what we know of the Predator, rather than just rehashing what we learnt in the previous film, as in so many weaker sequels. There’s more of its weaponry and its medical kit, what amounts to a tour of its ship, hints of its society and culture, and it’s given a nice balance of fallibility — not so indestructible that it’s stupid when the hero wins, but not so weak as to be undramatic or inconsistent. There’s one especially good moment where the Predator discovers a character is pregnant and so spares her, a nice touch both in terms of how it reveals the previously-unknown pregnancy (through the Predator’s heat vision) and in revealing the creature’s morals. It’s this sense of honour and a heightened mental capacity that marks the Predator out from other such creature movies, especially the Aliens, who are essentially animals (it would seem), albeit cunning ones.

Predator 2 is a dire film rescued by an excellent finale. As well as a decent chase and fight, it also builds on the first film’s mythology, revealing a decent amount about the Predators and hinting at more, without going too far or spelling it out too bluntly. If only such qualities could have extended into the opening hour, this could have been a sequel on par with the original.