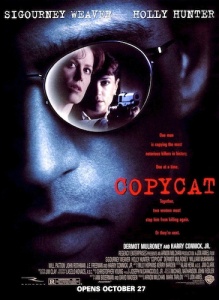 The Radio Times compare this favourably to David Fincher’s excellent Se7en, because both are high-concept serial killer thrillers released in 1995 but only one has been widely remembered. The Radio Times consider this unfair, suggesting Copycat deserves a similar level of recognition. Unfortunately, they’re wrong.

The most striking thing about Copycat is its very mid-’90s feel — tacky fashions, dull cinematography, instantly dating use of the internet — unlike Se7en, which has a more lasting style. In fairness, in these respects it’s not as bad as some films of the era (and indeed later), but it’s already tempting to reuse the central idea of an agoraphobic investigator in light of how far the internet has come in the last 15 years. Relatedly, the first video the killer sends to Helen, Sigourney Weaver’s agoraphobic criminal psychologist, is unbelievably chilling in spite of its primitiveness. I bet it gives some people nightmares.

I’m tempted to say there’s no visual flair — unlike (guess what?) Se7en. However, it’s merely the way DoP László Kovács photographs here that has no flair, leaving a plain look like any number of film-shot TV movies. The actual camerawork has its moments, not least in a couple of long takes, action sequences, and the depictions of Helen’s agoraphobia. While the latter is occasionally twee, especially early on, there are times when what director Jon Amiel and Kovács have come up with works, not least during the climax. As an affliction for the heroine it’s a nice concept, though a difficult one to work with for obvious reasons, but it’s exploited well and put to good use in a few of the set pieces.

Screenwriters Ann Biderman (who’s gone on to be one of the writers of Michael Mann’s Public Enemies) and David Madsen (who wrote, um, a TV movie) provide a story that is also less focused than Se7en. The killer’s pattern emerges eventually, but it’s less universal and not particularly well explained — what’s inspired him onto this spree? The idea of a Famous Serial Killers copycat is neat but not flagged up as well as it could be. Maybe it’s a positive that it’s not over done, but equally it feels like there’s more to be made of it. At least Biderman and Madsen aren’t afraid to be brutal about who gets killed, although at least one death lacks the appropriate ceremony. The randomness of another may irritate some but worked for me: in a genre where murder is usually so obsessively meaningful — particularly here, in fact, when you have a killer who is adding a new level of meaning to already loaded killings — it works to show that, sometimes, it’s entirely, depressingly, unstoppably random.

They also choose to reveal the killer about a third of the way through, which feels an unusual move but probably isn’t: there’s no real whodunnit element in the first place, and we still don’t get to know him even after his reveal. In fact, even by the end little or nothing has been shown of his character, including any hint of motivation. It seems he’s merely the right ‘type’ to want to go killing people and for whatever reason has an obsession with both previous killers and Helen. The post-ending ending is plain irritating too. It adds a minor twist to what we’ve seen, but actually robs the plot of its satisfaction. It’s a last-ditch attempt to suggest a sequel, Silence of the Lambs-style, when a conclusive ending would be more appropriate.

Talking of Lambs, Harry Connick Jr.’s Lecter-ish nemesis feels like a stereotype. I say Lecter-ish because he’s a killer already locked-up and aiding the police find another — nothing about Connick Jr.’s performance is even close to Hopkins’ Oscar-winning ability. Where Hopkins established a new kind of killer and forever glued himself into filmgoers’ psyches, Connick Jr. just provides a clichéd impersonation of a generic serial killer type. Among the rest of the cast, Sigourney Weaver gives a particularly good performance as an agoraphobic psychologist heroine, while Holly Hunter makes a very amiable lead detective. Dermot Mulroney’s character is less irritating than might initially be expected, while William McNamara does his best with some weak material as the killer… or does he? I mean, he’s not as bad as Connick Jr., but he’s not really good, just fine. He certainly doesn’t hold a candle to (of course) Kevin Spacey in Se7en.

Despite inherent flaws, it’s almost a shame for Copycat that it came out at the same time as Se7en: the similarly high-concept serial killer plot invites comparison, but Fincher’s classic simply does everything better. Hold it to lower standards, however, and it manages a passable, if unavoidably dated, job.