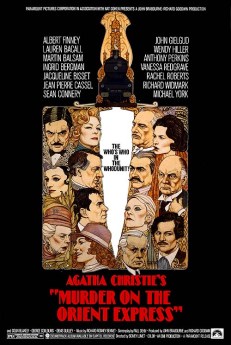 The plot is the stereotypical Christie set up: a group of fairly well-off people find themselves in a confined setting, one is killed, a sleuth works out who. This time it’s a train rather than a luxurious mansion, but the basics are there. This isn’t a criticism — I enjoy a good Christie adaptation as much as everyone else who’s kept the current TV incarnation on air for 21 years (and counting) — and here at least Christie has a number of twists to her usual style. As mentioned its launching point is a true story, the Armstrong kidnapping and murder being based on the Lindbergh kidnap of 1932 (just a couple of years before the book was written); the snow-bound train’s location (very apt after our recent weather) is certainly different to a stereotypical country estate setting; and then there’s the infamous ending.

I won’t spoil it here, just in case anyone doesn’t know it. Some are very critical of this particular denouement, labeling it an unsatisfactory cop-out that doesn’t make sense. Neither of these things are true. It is not reliant on an extraordinary coincidence — it might look that way at first, but the full explanation reveals it to be anything but — and there are numerous clues along the way as to what it might be, even if some are more thematic than the actual red herrings that almost lead Poirot astray. It’s a shame that knowledge of the ending is quite widespread these days, though that’s perhaps inevitable for a 76-year-old story. Still, I’ve done my bit.

In the lead role, Albert Finney’s Poirot may have received an Oscar nomination and, more importantly, been approved by Christie herself (according to some; according to others, she wasn’t impressed), but he now pales in the inevitable comparison with David Suchet’s definitive portrayal of the Belgian detective. Suchet has defined Poirot in a way few other major franchisable characters have been (Connery may be widely accepted as the best Bond, but there are plenty who’d choose Moore, Craig, Dalton and Brosnan, and you may even find someone who likes Lazenby; equally, Sherlockians may divide themselves between Rathbone and Brett, not to mention Cushing and hundreds of others). He has the advantage of being able to perfect the role across hundreds of hours of television, but nonetheless stands proud as the high-watermark that others can only try to reach (even those who played the role 15 years earlier).

Finney’s version is more obviously comical than Suchet’s. Where humour in the latter is derived from his serious fastidiousness, Finney plays it more for laughs; where Suchet seems almost solemn in his investigations Finney frequently bursts into laughter. It’s a broader interpretation of the character, one that ultimately lacks subtlety. At least Finney is thoroughly subsumed in the role, which means that after a while one does become accustomed to it.

The rest of the cast are well suited to their roles. Ingrid Bergman won the Best Supporting Actress Oscar for her role, though one wonders if it was a weak year for the category as her part is miniscule and not particularly memorable. Elsewhere, famous names such as Lauren Bacall, Sean Connery, John Gielgud, Michael York, and many more, round out a truly star-studded ensemble where each has but a small part to play. It must be relatively easy to attract big names to Christie adaptations — as the TV series still do — when the author is so beloved and the amount of time required to shoot is (for a guest star) so small. Best here, perhaps, is Martin Balsam as Poirot’s friend Bianchi, who’s treated to several good scenes, not least the series of interviews where after each he confidently declares “it was them!”

As a standalone film, Murder on the Orient Express is a skilled effort (I can’t comment on its quality as an adaptation because I’ve never read the book). For a viewer so familiar with Suchet’s interpretation of the character, however, even an all-star cast can’t quite remove the feeling that it’s not quite right. The Suchet-starring adaptation of this particular case has been filming recently, hopefully for broadcast later in 2010 (though knowing ITV we could have to wait as long as 2012), but even though it’ll have the definitive Poirot leading its cast, this film leaves a lot to live up to.