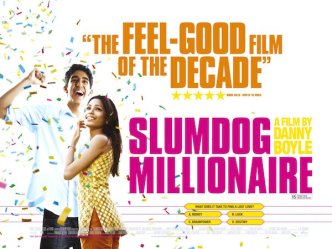 As we head in to this year’s awards season, I’ve finally got round to seeing last year’s big winner. It’s the Little British Film That Could, and I do feel like I’m the last person in the country to see it.

With its brightly coloured posters and home ent covers, cute child actors wheeled out at awards dos, and widespread popularity, it’s not hard to believe the pullquote someone at Fox’s marketing chose for the DVD cover: “the feel-good film of the decade”. An uplifting tale of a young no-hoper appearing on the world’s biggest game show and winning millions of rupees thanks to a generous helping of luck that means his multifarious life experiences have provided him with the exact answers to all 15 of Who Wants to Be a Millionaire’s genius-stumping questions, surely?

Everything that claims it’s a “feel-good film” is being slightly disingenuous. It has a happy ending (I don’t think that counts as a spoiler for something that’s billed as “feel-good”), but until those closing moments it’s unrelentingly grim. Realistic, I’m certain, and depressingly so, but it seems designed for anything but making you feel good. The author of that chosen quotation, News of the World’s Robbie Collin, claims that he means the film is cathartic (not that I got that from his review, to be honest) — the happy and justice-bringing endings unleash goodness in the wake of the dire events that lead to them. It’s a sound theory, one that has often worked elsewhere, but not for me with Slumdog.

The problem is the ending. Director Danny Boyle’s recent films have all made a relatively poor show of their conclusion and Slumdog is no exception. True, it’s not close to the mess of Sunshine, but it doesn’t hold up in the way it ought to either. I don’t have a problem with it being reliant on guesswork — coincidence and luck form the backbone of the plot, making it permissible that our hero should win by chance rather than knowledge — but that some of its resolutions are too little too late to make one feel good about what’s already occurred, and the way it seems to bend the concept of Millionaire to fit its story somehow grates for me. I mean, is the name of the third Musketeer really a £1 million question?

But I don’t want to berate it too much because, in spite of the unconvincing finale, Slumdog Millionaire is a rather brilliant film. It’s peppered with convenience and flaws that go beyond the extent allowed in a plot based on coincidence (how come the questions come in the order the answers happened in his life? What about answers to all the questions we don’t see asked?), but these can be allowed to slide as a structural gimmick that facilitates something of an exposé of life for slum kids in India. Whether it has a documentary level of realism or not, and whether it under-sells or over-states the influence of gangsters and ease of mutilation and murder, the film’s unabashed grimness is surely closer to reality than most would dare. No wonder it nearly went straight to DVD.

The real revelation — once you get over the shock of it being, well, shocking — are the child actors. Here is where Boyle earns his Best Director awards, coaxing flawless lead performances out of a very young cast. Dev Patel may have been the focus point for plaudits, and while this isn’t undeserved, it’s the younger kids who play the same characters that arguably give the most memorable turns. They’re put through the ringer in almost every way imaginable and are never less than convincing, a feat for such young actors — so young that, as mentioned, the skill of Boyle (and, one imagines, “Indian co-director” Loveleen Tandan) is what’s really on display.

If there’s one good thing about Slumdog being billed as feel-good it’s that more people will have seen it, whereas promotion based on it being a gritty account of poverty, misery and abuse would surely have turned audiences away. And perhaps for most viewers the catharsis of a happy ending works, though the only person I’ve spoken to who felt that way is the aforementioned Mr Collin (and by “spoken to” in this instance I mean “tweeted”). The journey there certainly works though, and if by the end Slumdog is trying to both have its cake and eat it… well, I like cake.

Now there’s a quote for the DVD cover.

Channel 4 and 4HD kick off their Indian Winter season with the TV premiere of Slumdog Millionaire tonight at 9pm.