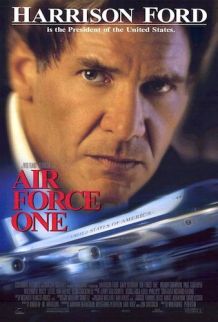 Harrison Ford stars as President Indiana Jones — sorry, Jack Ryan — no, James Marshall (that’s it) in this action-thriller from the Die Hard school of moviemaking. Yep, this is “Die Hard on a plane” — except it’s not any old plane, it’s Air Force frickin’ One; and the Bruce Willis character isn’t any old washed-up cop, it’s the frickin’ President of the U.S. frickin’ A. Hells yeah!

At least, that’s how I imagine the pitch went.

It’s a faintly ridiculous premise: Russian terrorists take control of the President’s aircraft in an attempt to get their favourite General released from prison; the President, still on board unbeknownst to them, goes all John McClane. On their ass. Es. Oh, whatever. The really fun thing is, screenwriter Andrew W. Marlowe and/or director Wolfgang Petersen seem to have set themselves the task of upping the level of ludicrousness about every ten to fifteen minutes — the things that go on during the final act have to be seen to be believed and so I won’t ruin them here. Though, suffice to say, if you think someone taking a bullet for the President is old hat, imagine what a fighter jet might do…

If you can suspend your disbelief — and that’s certainly the film’s greatest intellectual challenge — then what goes on is pretty fun. Yes, much of it’s a Die Hard re-hash, but (as someone once said) if you’re going to steal, steal from the best. The initial hostile takeover may be the best action sequence, but the story does its best to hold our interest with a variety of new problems to be solved by the war-hero President-turned-action-hero (the former mentioned in one line of dialogue to help explain the latter, naturally). More entertaining, it must be said, is watching Marlowe and Petersen battle with the problem of making a fairly brief idea stretch to a feature.

Unfortunately, this problem sometimes manifests itself too obviously. The lead villain is dispatched before the final act kicks in. Even if you think narrative theory and screenwriting how-to guides have too large an influence on modern movie structure, surely most will agree that dispensing with your antagonist a good 20 to 30 minutes before the credits roll is a bit much. Though the badly damaged plane still has to be landed, it doesn’t have quite the same anyone-could-die tension as much of the film; a tension which impresses, incidentally, as there’s a disaster movie level of suspense in the potential executions, something most action thrillers fail to achieve with a line up of victims and survivors that’s predictable from the get-go.

A cast who were later TV bound (just see how many faces you can spot from the likes of 24, CSI and, for one of the big stars, Damages) give their all, though Gary Oldman is wasted in a sub-Hans Gruber / neutered-Stansfield role. Harrison Ford again shows he can play variations on a theme — President Jim Marshall may not be as cocky as Han Solo or Indy, but he’s an older figure from the same ballpark. But that’s what’s required in the role and that’s why he was cast, so why complain? On the technical side, there’s a showcase array of pre-CGI-overload special effects, particularly in the closing minutes.

The film’s most interesting facet, 13 years on, is the opening. President Marshall’s stance on terrorism and his commitment to stopping evil foreign regimes probably sounded great rhetoric at the time; and it probably sounded even better post-9/11, when those who perpetrate terrorism and those regimes that support it were obviously at the forefront of everyone’s mind. But after Afghanistan and Iraq, it’s beginning to seem a little awkward. As we’ve seen, tyranny may be quickly overthrown, but peace is much harder to restore; and genocides are worth stopping, but only if there’s oil involved. President Marshall’s peace still sounds bold and correct in theory, but it’s difficult to imagine it going down so well today.

But, really, that’s a retrospectively unfortunate aside: the West Wing-esque fast-talking political early minutes are really just set-up for the barmy action that follows, and taken on that level it’s as disposable as it needs to be.

Overall, my favourite thing about Air Force One is an indefinable quality: it’s an ’80s/’90s action-thriller, the kind of thing Hollywood gave us before The Matrix came along and changed everything. It has a feel — the same one that’s in Die Hard (of course), or The Rock, or other films of this era — that we don’t seem to get any more. Things move on and change, naturally, but I miss this quality a bit, and it’s always nice to discover another example of it.