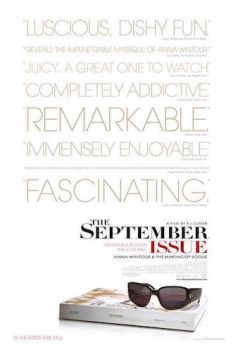 I don’t really care about fashion, which means I really don’t care about Fashion — i.e. the world inhabited by Vogue and its American edition’s infamous editor, Anna Wintour. But I did watch The Devil Wears Prada and quite enjoyed it, while this documentary comes well-praised. And after all, what’s documentary for if not to educate you on a subject you know nothing about?

The September Issue, as it turns out, is surprisingly enjoyable. Is it illuminating? I’m not sure, though some bits are occasionally fascinating — director R.J. Cutler’s handful of interview snippets with Wintour are well-chosen; brief but potentially revealing, even as she does her best to given nothing away.

There’s no narration — nothing is rammed home. It occasionally feels free-form, a collection of bits and pieces about the making of one issue. But narratives form themselves amongst this, like the relationship between Wintour and Grace Coddington, her chief… I forget the job title, but it’s something magazine-designer-y.

Grace is, perhaps, the real star of the film. While Wintour floats around unknowably (though Cutler and co do their best to get under her skin, and manage to dig some information out in the process), it’s Grace who is frankest with the camera, who reveals her somewhat tragic past, who stands before a garden in Paris and is lost to memory staring at its beauty. She’s a wise centre for the film:

Wintour, one suspects, will always be unknowable, a figurehead more than a person; but Grace is relatable, as human as the rest of us.

And actually, Wintour isn’t the most irritating person here; not when you’ve got ludicrous fashion stereotypes like André Leon Talley drifting in and out. This in spite of her opening assertion, apparently designed to drive away all non-Fashion-fans right from the off. No, love, not everyone secretly wishes they were part of your world; not everyone secretly thinks it’s the height of sophistication and glamour and only criticises it because they can’t get in on it.

Even after a whole film that does something to reconfigure her as slightly more human, and to repaint the industry as occasionally relatable, coming back to that introductory drum-beating still grates. But the rest is, somewhat surprisingly, worth it.