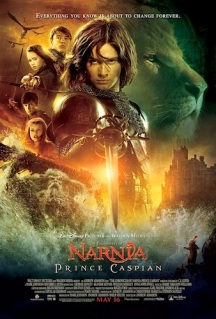 The Pevensie children return to Narnia, but hundreds of years later, in Disney’s last adaptation from C.S. Lewis’ series (don’t worry, Fox have taken it over). For those keeping track, this is both the second book and second film, but fourth chronicle chronologically. Which is fine for now, but I wonder what they’ll do come those earlier-set ones…

This time out, the world of Narnia has a harder edge. We’re still in PG territory — just — but everything’s turned a bit nasty, with a race of humans having wiped out the fantastical Narnians. Or (naturally) so they thought. Throw in some moderate political intrigue and you’ve got a more grown-up feel, if only slightly. It also makes for a slightly more cohesive tale — there are no odd elements leaking through from our world, like lampposts or Father Christmas, though one can well argue this removes something of Narnia’s unique magic.

It’s perhaps overlong, with numerous places trims could be made without denting the overall story. A half hour could surely have been saved without too much exertion. The first hour in particular is a tad slow, though the sometimes-wordy plot, based around some light court intrigue, adds depth beyond what might otherwise be a series of humans-on-magical-creatures punch-ups. I can’t comment on faithfulness here because it’s an awfully long time since I read the books. Besides, that running time is distorted by a whopping 12 minutes of end credits. I vaguely recall that, a few years ago, the second Matrix film 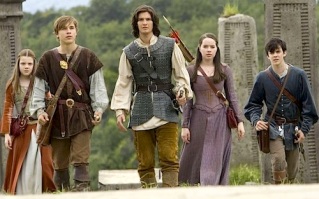 held the record for the longest closing credits at 10 minutes. I don’t really know what’s common these days but 12 minutes is nonetheless 8% of the film.

Once the human squabbling is passed — or by-passed, depending on your point of view — the human-Narnian war/one big battle really kicks off. Indeed, action sequences are frequent and fantastic throughout. The raid on the castle is tense, exciting and ultimately devastating — the troops left behind to certain slaughter is an incredibly dark moment in a PG-rated kids’ film. Later, a climactic sword fight is well staged, making excellent use of point-of-view shots, something I don’t recall seeing in a sword fight before.

The epic final battle comes as close to rivalling Helm’s Deep as anything I can think of, albeit — in typical Narnia style — in broad daylight on a big field. It has a real story to it, with specific moves being made by each side in the name of an overall strategy, rather than just A Lot Of Good Guys charging at A Lot Of Bad Guys and hacking away ’til one side wins, the apparent battle tactic in most other such large encounters on film.

The child actors aren’t going to set the world alight but are perfectly decent. I’m still not fully sold on Liam Neeson as Aslan, though I suppose the contrast of boom and gentility may be the point. Eddie Izzard is sadly underused as the excellent Reepicheep, who comes across as Narnia’s answer to Shrek 2’s Puss in Boots. Everyone else is fine — if nothing stands out, there is at least humour and an appropriate level of villainy provided.

Perhaps shortages such as this make the film a rather empty experience, as some have claimed. Not even titular new boy Caspian is treated to a huge amount of characterisation, and what little there is elsewhere depends wholly on knowledge of the first film. In fact, while the primary story largely stands alone, a proper understanding of it relies on the viewer remembering the previous instalment — at no point does anyone bother to explicitly explain that these kids we’ve just followed into Narnia are siblings, never mind that they were there before for decades as Kings and Queens. Maybe this is respecting your audience’s intelligence,

or maybe it’s just counting on their memory a bit too much. With only limited characterisation and basic political complications, Prince Caspian really boils down to a series of fights and battles. Nicely done fights and battles, I’d argue, but still, no one’s coming away from this particularly enriched.

I was quite disappointed with the first Narnia in the end. It was entertaining and at times fun, but the primary-coloured bloodless climax in particular made it feel like Lord of the Rings Lite. I know I’m not alone in this — with the teaser poster for the next film, The Voyage of the Dawn Treader, coming out last week, I noticed a number of sites commenting that they’d not bothered with the second film after disliking the first; box office numbers were down too (though it’s still the 108th highest grossing film ever). Loyalty to a series I enjoyed as a child ensures my return (albeit two years after the theatrical release) but it’s a shame others chose to pass it by, because Prince Caspian is a step-up from The Lion, the Witch and the Wardrobe in pure entertainment stakes. Hopefully this tone continues into Dawn Treader and, fingers crossed, the four chronicles beyond.