“I don’t know who you are. I don’t know what you want. If you are looking for ransom, I can tell you I don’t have money. But what I do have are a very particular set of skills; skills I have acquired over a very long career. Skills that make me a nightmare for people like you. If you let my daughter go now, that’ll be the end of it. I will not look for you, I will not pursue you. But if you don’t, I will look for you, I will find you, and I will kill you.”

So goes Liam Neeson’s famous (ish) mission statement in the latest (ish) action-thriller from the team behind The Transporter series. You need know little more of the plot, though it still takes half an hour to get to that little speech.

If you do want to know more of the plot… well, remember Man On Fire? The Tony Scott/Denzel Washington one (I presume the older one’s the same, but I’ve not seen it). Well, replace Washington with Neeson and Dakota Fanning’s character with “his daughter” and you’ve more or less got it. Taken is practically a remake, only in Europe, with a happier ending, and an hour shorter. It’s also not as good, but that’s a different matter.

You may be wondering why it takes a half-hour to get to that mission statement. Well, Man On Fire style, it’s because we’re treated to a significant chunk of character-based drama before the kidnapping occurs. This stuff at the beginning is either Character Deepening and Motivation Revealing or just dull and needless, depending on your point of view. And while I’m all for character and motivation and all the other stuff that actually makes

A Good Script rather than A Series Of Scenes, I’m inclined towards the latter here, because of the comparison with Man On Fire.

The Scott film showed us a character (this would be Washington) who’d shut down emotionally, who had nothing to care about. He meets a girl who he has to protect; that’s his job. But she brings him out of his shell, gives him a reason to live, to genuinely care about her rather than as a means to a pay-packet. And then she’s taken and he hunts those SOBs down. This is character building. In Taken, we’re shown an ex-CIA-or-something dad who loves his daughter. We spend half an hour being shown this. Then she’s taken and he goes after those SOBs.

See the difference? Washington has to go from point A to point C via point B before he’s ready to go on his killing spree/rescue mission. Neeson goes from point A to point A. Establishing he’s an ex-CIA-or-something dad who loves his daughter would take five minutes — indeed, it does, there’s just Some Other Stuff too — but the action portion of the film lasts less than an hour, so something needs to make it feature length, right? There’s nothing wrong with the early dramatic scenes in themselves — Neeson is an excellent actor, he could work this material in his sleep — but they’re needless for the real story.

So what of the real story? Well, at times it feels like someone filmed a treatment — once underway it’s all plot, action and not much else. Characters arrive only to be quickly dispatched, either because their purpose is served — the Albanian translator, for example — or in a body bag — which is nearly everyone else. In many ways it has an admirable efficiency — the plot is an action delivery system, not a proper story — 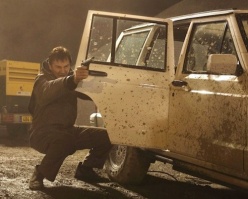 but after half an hour spent setting things up, it’s like screenwriters Luc Besson and Robert Mark Kamen felt they’d done their dramatic dues and just wanted to watch people get beaten up. Or shot. Or blown up. Or hit by trucks.

The action sequences are quite good. The thing is, Neeson’s an Actor, not a martial arts expert or glorified stuntman. He beats people up fine, he shoots a gun fine, he drives a car fine, but he can’t show the physical dexterity of Jason Statham in The Transporter, never mind Jackie Chan/Jet Li/insert Eastern star of preference here. The fights entertain while they last in the way any above-competent action movie is, but there’s nothing distinctive about any of them to raise them to a level where they’ll be remembered. And that’s pretty much fine, just not special.

Not to criticise director Pierre Morel, though. Largely pointless though they may be, there’s nothing wrong with his handling of the earlier scenes, and the same goes for the later ones. Visually he gives the film a slickness and sheen that seems to lift it slightly above Besson-and-co’s other recent Euro-American action/thrillers. Or that might just be because it’s the first I’ve watched on Blu-ray. (Incidentally, is it me or are the subtitles ineffective on the UK disc? None of the French or Arabic was subbed — and it seems it’s meant to be, because the English HOH track has it so. I was reduced to flicking that on and off every time someone spoke Foreign, which is A Pain. And rarely worth it. The special features seem to suffer a similar defect too.)

Despite all this, Taken’s an entertaining actioner. Unsurprisingly, there’s something satisfying about an apparently calm and controlled father being allowed to explode in precision violence against a bunch of scumbag white slavers. It’s wish fulfilment; proper justice finally being done. And, for extra gratification, he’s got the requisite spy skills — the bit with the radio and walkie-talkie, for example — and, even better, edge — perhaps the film’s most memorable moment (after that speech, anyway), when he shows the lengths he’ll go to when visiting a ‘friend’ for dinner.

If you think about it too much post-viewing, Taken begins to fall apart. Quickly. But for nearly 90 minutes while Liam Neeson shows those Evil Eastern Europeans who’s boss, it’s action-packed wish-fulfilment of the morally satisfying variety. Either that or bile-filled hate-driven xenophobic venom. Each to their own.