I believe Tim Burton coined the now-ubiquitous term “reimagine” when he remade — I mean, reimagined (sorry Tim!) — Planet of the Apes almost a decade ago. Now, he turns his re-imagination to a new version of The Mad Hatter — sorry, posters/ad campaign/DVD art confused me, I mean Alice in Wonderland — which receives its controversially speedy (remember all that fuss with Odeon?) DVD/BD release tomorrow.

This time, rather than starting from scratch, Burton has created a sort of “Alice 2”, crafting a new plot from the novels’ elements. It’s set 13 years after Alice’s first trip down the rabbit hole, which presumably occurred in the classic Disney animation (as opposed to her two trips in the original novels, or any of the other numerous screen versions there have been). Maybe this is for the best — with Alice committed to film so many times before, one might well argue there’s no need to see the exact same tale done again.

Consequently, this new Alice positions itself freshly in two ways: one, as “Burton’s version”, and two, by following in the footsteps of the specific side of the filmic fantasy genre started by Peter Jackson’s Lord of the Rings, which has since encompassed the likes of two Narnia adaptations, The Golden Compass, and probably several more that I’m forgetting. Although it uses the original’s most famous elements, the film’s narrative and structure is familiar from those recent films more than 19th Century literature, particularly a final epic (well, epic-ish) battle in which our unlikely heroine emerges as the long-prophesised One Who’ll Win It For The Good Guys.

It’s a moderately interesting cycle to attach it to, one it seems has been missed by its pigeon-holing as “a Tim Burton film” and “another Alice adaptation”.

So, talking of Burton, Alice falls into the same ballpark as Charlie and the Chocolate Factory and the supposedly-forthcoming Addams Family remake: they’re the kind of films one expects Burton to be interested in making, and consequently there’s a sense of ticking-boxes about the results. Like Charlie, Alice offers no real surprises from either Burton or their shared star, Johnny Depp. Both do good work, certainly — the former is visually imaginative, the latter suitably barmy — but neither produce anything you don’t expect. True, one might not have been able to predict the exact elements they wheel out — particular Depp’s random use of a Scottish accent — but it nonetheless never feels unexpected.

Mia Wasikowska is something of a revelation as Alice. She’s a newcomer, so say reviews — the kind of newcomer who’s been in a dozen other things of various size — and presents an almost-knowingly naive Alice, which seems an entirely appropriate characterisation. She’ll next be seen as another titular character in a classic novel adaptation — the BBC’s new Jane Eyre (as if the one they did four years ago wasn’t good enough). (It was.) — which is neither here nor there when it comes to this film, really. I’m sure she’ll do fine. 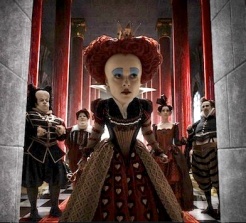 Among the rest of the cast, Helena Bonham Carter does a speech-impedimented Red Queen that feels as familiar was Burton and Depp’s work; Anne Hathaway’s White Queen is amusingly floaty, her hands permanently raised in a faux-delicate gesture; Crispin Glover is under-characterised and marred by some dodgy CGI (quite what’s been done to him I don’t know, but his movement is frequently jerky), but otherwise a decent enough henchman. In the all-Brit voice/mo-cap cast, Matt Lucas is best as Tweedles Dum and Dee — sadly, there’s not enough of him… um, them… — while Alan Rickman is Alan Rickman as the Caterpillar; Stephen Fry has little important to do as a less-scary-than-usual Cheshire Cat; and others — like Michael Sheen, Paul Whitehouse and Timothy Spall — blend into the background with competent but unremarkable work.

The post-production 3D proves (as far as I’m concerned) that James Cameron is being falsely elitist and some reviewers are too easily led: it is very rarely less convincing than what we saw in Avatar. True, Burton doesn’t show it off quite as much as Cameron did — this is a normal film that’s been put into 3D (even the stuff-flying-at-the-camera shots feel like they would’ve remained in a 2D-only version), not one designed to make you go “woah, look at that world! In 3D! I’m, like, so immersed”, the driving factor behind 90% of Avatar’s visuals. I suspect Roger Ebert’s correct that Burton’s visuals would pop more in 2D, away from the sunglass effect of polarised specs, and the added depth adds little of significance to one’s enjoyment of the story or even the visuals… other than 3D sometimes looks nicer, what with all that depth. Well, maybe. 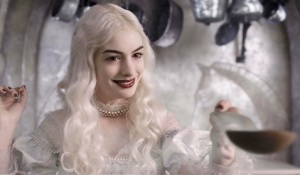 The funny thing about Burton’s Alice is that — despite the ultimately needless 3D, the familiar fantasy-epic storyline grafted onto Carroll’s characters, and the apparent lack of inspiration from either the director or his cast — it’s still quite enjoyable. It’s not going to do much to engage your emotions or your brain, it won’t give you any hearty laughs or edge-of-your-seat thrills, and it may occasionally make you wish it would get a move on — all of which means that, by the end, it can feel a tad slight. Valid criticism abounds on the web, but… well, I enjoyed it. Maybe I’m just too forgiving.

Alice in Wonderland is available on DVD and Blu-ray (2D only) now in the US and from Friday in the UK.