Public Enemies came out nearly a year ago now, and I remember two things about its release: firstly, that the first review I saw was Empire’s, which gave it five stars; secondly, that then no one else seemed to agree.

Looking back at reviews now, it seems to be an incredibly divisive film — and truly so. Most “divisive films” actually have a consensus with a notable-few detractors, but Michael Mann’s ’30s mini-epic gangster biopic sees major reviews range from glowing five-stars-ers to praise-free two-stars-ers. I’m going to use some of the main bones of contention to kick off my own thoughts and likely offer up one or two others somewhere.

The most frequently discussed factor, it seems to me, is the film’s visual style. Mann continues his love affair with digital video, seen previously in Collateral and Miami Vice (both of which I very much enjoyed), but here he pushes it to the limit: gone is any pretence of 35mm gloss, much of the film looking ungraded and featuring the fluidity of video’s higher frame rate. Some reviewers see this as progressive, bringing an unpolished documentary realism to a period setting. Others lament the lack of polish and glamour, which correctly post-produced digital can still have. The latter claim that, rather than making the film appear ‘gritty’ or ‘real’, it looks distinctly low-budget and technically poor. To put a pair of direct quotes head-to-head, Wendy Ide of The Times criticises it thusly:

Mann’s digital aesthetic seems to involve making the movie look as grimy and unpolished as possible. Post-production is for wimps. That irresistibly glossy, larger-than-life reality created by Hollywood movies is diminished here. The flat glare of the digital camera emphasises the artifice of the film-making process rather than bringing the hoped-for gritty authenticity to the story.

On the other side of the fence is Ian Nathan’s Empire review (the one I mentioned at the start):

Such is the docu-clarity of this digital skin, you have to readjust your thinking. This isn’t the glamour of the movies, warmly draped in celluloid, but rather an instantaneous, ‘stunning’ reality: every facial pore, every herringbone stitch, every silvery wisp from a smoking gun comes crystal-clear. Strangely, it makes the film both period and contemporary: history through a sci-fi lens.

I’d be among the first to be worried about Mann’s unglamorous, cheap digital video style — indeed, when I saw the first trailer, I was distinctly unimpressed — but colour me converted, because it largely works here. I wouldn’t want to see it on every film, but as a stylistic choice it’s a valid one; a bit like Paul Greengrass’ super-shakycam in the Bourne films: as a visual choice for one franchise, it fits; but when it’s unthinkingly copied elsewhere it becomes a problem. Martin Campbell knew this, which is why Casino Royale is grittier than previous Bonds without resorting to such cheap tricks; Marc Forster apparently didn’t, which is one reason Quantum of Solace didn’t go down as well. Mann’s documentary visuals are the same: he’s made this choice and carries it through, but you don’t want it to take over as How All Films Look.

What it brings here is an unusual quality. It’s clearly fiction, of course, albeit fiction based on fact, and there are still plenty of extravagant angles and editing so that you’re never in danger of thinking Mann is trying to pass this off as a documentary. But couple the raw cinematography with a meticulous attention to period detail, with a sound mix that is consciously rough and real, and you get a sense that this is how it was — it’s not a glossified movie version, it’s a How It Was one. Public Enemies is to the old gangster film as Generation Kill is to the old war movie, or something like that.

Talking of the sound mix, that’s an interesting one, something else The Times criticised: “it’s so messy that I rang the distributors to check whether there was a technical problem with the print they showed or the cinema they screened it in, but both were apparently fine.” Music is liberally used as in any standard fiction film; Mann could have stripped it out, like so many realism-aimed productions do these days, but he hasn’t. More significantly, the gunfights sound almost unique. In the same way the images look like unprocessed footage straight from the camera, so the audio often sounds like on-set sound with no significant foley or ADR. This is most likely a calculated effect rather than the truth of the process. The gunfights, rather than looking and sounding like perfectly staged and produced movie battles, sound and look more like something you might see on the news from a war zone.

After the visuals, the next biggest disagreement is over characters, performances and story: some find something deep in them all, to be considered and analysed in an adult fashion; others find them shallow, slow, lacking interest or professionalism. Some say the whole film is a lesser homage to old gangster movies; others say it’s not like them in the slightest, a new rulebook to play from. So which of these diametrically opposed opinions do we believe?

The characters do and don’t lack depth. The relationship between Dillinger and Billie is a significant part of the film, receiving roughly equal attention to Dillinger’s criminal deeds — it’s his final words to her that close the film, not his death. Christian Bales’ G-man, Melvin Purvis, on the other hand, is less developed, but to say he lacks any character is to do Bale’s performance a disservice. Behind Purvis’ blunt dialogue and stolid manner, and in slight gaps and lapses around it, one gets a sense of the true man and his real thoughts. The postscript — that he resigned from the FBI a year later and ultimately took his own life — reinforces and confirms the subtleties Bale injects into the performance.

Most other characters are glossed over fairly quickly however, only Billy Crudup’s J. Edgar Hoover really standing out from the crowd. There are bizarrely small appearances from the likes of Carey Mulligan, Leelee Sobieski, Emilie de Ravin, David Wenham and Stephen Dorff (one might also add Giovanni Ribisi to this list), which almost take one out of the film. True, none of these are Big Names — it’s not like seeing Brad Pitt in a two-minute cameo or something — but when they’re recognisable faces it still feels a little odd. Mulligan in particular, who barely has a line of dialogue. She was still some way from her recognition for An Education when Public Enemies was shot and released, but after significant roles in a variety of TV and smaller films one thought she might’ve dipped her first toe in the Hollywood waters with a part a little bigger than a glorified extra. This is an insignificant point, I know, but as each one of these turned up in their tiny roles I had a brief moment of “oh, didn’t know they were in it… and is that all they’re in it for?”, and was kicked out of the film.

Moving on… The sprawling narrative and cops-vs-robbers structure do make it feel a little like a period Heat, though it lacks the character drama on both sides that characterised that film. Mann is perhaps hamstrung by sticking to the real story (though a few moments are afforded dramatic licence, like Baby Face Nelson dying months earlier than in reality); most notably, the finale is somewhat anti-climactic. 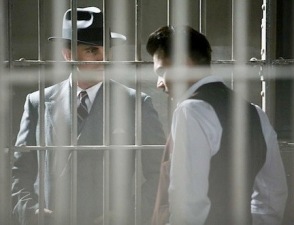 Mann does his best, cutting around Dillinger in the movie theatre, the bizarrely-apt film he’s watching (this isn’t dramatic licence — Dillinger really saw Manhattan Melodrama before his death), and the agents waiting outside, with Elliot Goldenthal’s score working overtime to ring out the tension. But, narratively speaking, it’s not the grand climax or mano-a-mano duel one typically expects to close out such a film. Maybe that’s a good thing.

Briefly (relatively speaking), a word on a pet hate of mine: why isn’t the title on screen until the end? I remember the days when it was newsworthy when there wasn’t a title sequence, just a title card, never mind when they began to leave the title until the end too. Goodness only knows why this has developed as a trend in recent years. What’s wrong with putting the title before everything, right up front? You think people are going to get bored by a 10 second title card? Even worse are films which have a natural break point, a perfect spot for a whole title sequence or, if you really must, just the title card; films which actually have a blatant pre-titles, but actually lessen their impact by not including the title there. Max Payne, I’m looking at you. Public Enemies doesn’t have as clear-cut a pre-titles, but it does have a place for a title card — indeed, it plasters 1933 across the screen as if it were the title — maybe they thought audiences would get confused? Somehow? … No. So why bury the title in the middle of the end credits? Why not just put it up front? I know this doesn’t really matter, even less so than the peculiar casting choices, but, nonetheless, why?

Back on topic. Comparisons to Heat are warranted, but Public Enemies remains distinct in a number of ways — the period setting, yes, but (to bring us full circle) Mann’s post-Collateral obsession with digital video comes to a head here and colours the film, drawing attention to itself in a way Heat’s ‘normal’ cinematography simply doesn’t. Technical accomplishments do not a film make, but Dillinger’s true story 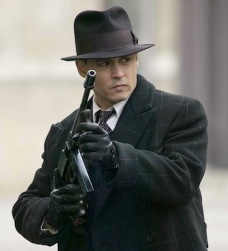 is largely well converted to a dramatic piece, if occasionally a little episodic (as is the way with all biopics) and overlong towards the end.

In my view, most of the criticisms levelled at Public Enemies are either baseless or a matter of opinion. Well, of course reviews are opinion, but here more than usual one’s personal aesthetic taste factors into one’s opinion of the film’s overall quality. I’m not certain it’s Empire’s five-star masterpiece — but it might be.