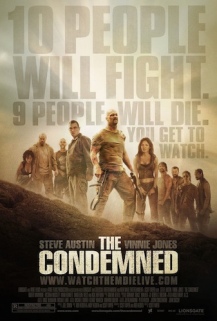 The Condemned is an old-fashioned-ish action movie, produced by WWE Films — i.e. the people behind all the wrestling claptrap. I should very much like to point out that I don’t care one jot about WWE or any other form of wrestling, real or faked. So why watch this? Because it’s got nothing to do with WWE itself aside from one (or more, I don’t know) former wrestlers acting in it.

The plot, essentially, concerns a bunch of hardened murderers being purchased from the death rows of various third world prisons and dumped on an island where they will fight to the death, broadcast live on the Internet for the enjoyment of paying customers worldwide. Yes, it’s Battle Royale with a sort-of-moralistic twist — “heck, if these guys are gonna be executed anyway, they may as well do it to each other for our entertainment, right?”

So, it sounds trashy; it sounds pitched in that kind of you-can-almost-believe-it-would-happen-for-real ballpark that might provoke debate; though it also sounds like we’re going to be told this is all actually quite moral and acceptable (watching people die? Yay!), and we’ll perhaps need to switch off from the plot because, really, it’s just an excuse for a good fight.

Well, that’s not quite so — and I’ll pick on the people who nonetheless insist this is brainless in a bit — because The Condemned is surprisingly good. It starts well, and one keeps expecting it to degenerate into rubbish, but it never quite does. This is partly due to lowered expectations, true, and I’m not claiming it’s a piece of philosophical art — it’s still essentially a straight-up action movie — but there’s more to the story and its inherent issues than one has any reason to expect. 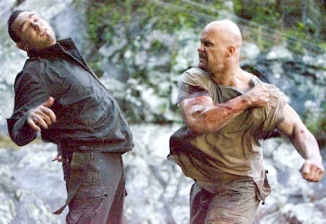 Indeed, in places it’s even satirical. Largely, though, the plot flatly commentates on society’s preoccupation with violent entertainment. Ironically, this is criticising not only organisations like WWE, who produced the film, but the genre of the film itself. It’s difficult to tell if director/co-writer Scott Wiper and his fellow filmmakers are aware of this irony/self-criticism, but if we give them the benefit of the doubt it becomes a nice layer.

Technically it’s not a remake of Battle Royale (there’s no credit to that effect at any rate), but the plot shares a shocking number of similarities: a group of people relegated to an island for a fight to the death with only one survivor, watched by millions of paying customers, with explosive bracelets that kill them if they don’t comply. OK, so The Condemned is a webcast and the bracelets are on the ankles not necks, but those are hardly huge leaps. Though it lacks originality, the use of death row criminals rather than innocent schoolchildren lends The Condemned both a more realist edge (you can’t really imagine the situation in Battle Royale ever happening, whereas The Condemned’s scenario is almost plausible) and a different social commentary — if these people are going to die anyway, why not let them fight it out for mass entertainment?

The film could choose a simplistic moral path; indeed, as it’s a WWE-produced action movie, one more or less expects it to fall on the side that, yes, this is actually quite a good idea. Fortunately, however, it doesn’t, and while the opinions may ultimately be explicit, with clear cut good and bad guys, it at least develops them to this point rather than starting out that way. In this respect, one might argue it has stronger, more dimensional characters than even some other well-respected action movies. 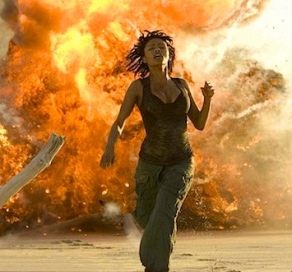 The same can be said of the action. With ten people, nine of whom will die, it could just be a series of fights where the designated Good One emerges victorious. And yes, there are a couple of fights of this nature, but as Things Go Wrong the realistically sick side of the ‘game’ is revealed: one female is cut up and presumably raped, all streamed live, while another is tortured before eventually being burned alive. It’s disgusting but, crucially, the film agrees that it is. That might sound obvious, but one suspects certain entries in the torture porn genre would disagree. That it draws you in to the brainless action movie mindset — fights! deaths! yay! — before twisting it with a dose of nasty reality suggests a greater degree of thought to both its structure and social message than one might expect. Maybe this is only a serendipitous side effect of the story path the writers chose, but even if it was an accident the success of it is still present.

Events are kept rolling with a couple of different plot threads. When so many films of every genre are padded to make a decent length these days, it’s refreshing to find one that has good reasons to be as long as it is (and still below two hours, note). Perhaps there are a couple too many convicts to dispatch early on, but that’s a minor over-extension. Subplots with the FBI and a girlfriend add different perspectives alongside the twin-pronged thrusts of action on the island. The viewer is never allowed to forget that events are being watched — the goings-on in the producers’ camp are given as much time and attention, even during the action scenes, as anything going on in the jungle. Thematically, this is as much about voyeurism as death-dealing. 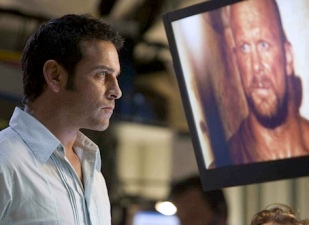 Something that amuses me is how many reviews call this “a brainless action movie” and make assertions like “the dialogue only serves to get from one action scene to the next”. Now, I’m not going to argue that The Condemned is actually some essayistic polemic on the evils of the media or modern violence-obsessed culture, but it has more to think about than the majority of action movies — meaning it’s neither brainless nor devoid of importance between action scenes. Perhaps you can enjoy this solely as a series of action scenes, but I have to wonder if those who do didn’t so much turn their brain off as have it removed (assuming there was one there in the first place) — the commentary on voyeurism and violence isn’t subtle and therefore certainly not accidental, so quite how it can be missed is beyond me.

Perhaps I’m overrating The Condemned here — it’s still a WWE-produced action movie and a Battle Royale rip-off, after all. But it has both competence in its direction, acting and action (you don’t have to go as low as a Uwe Boll film to find weaker efforts than this), and some level of thought in its script. I’ve seen a lot worse, and avoided a lot, lot worse — see Five’s movie schedule for examples of both. By contrast, The Condemned is a masterpiece; and at worst, it’s a lot better than it has any right to be.