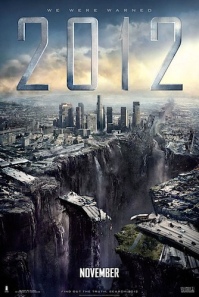 2012’s end of the world occurs courtesy of messy CGI. I’ve seen better graphics in current-generation computer games than some of the sequences here. And there’s too much of it. Letting Emmerich’s imagination — and budget — run rampant means there’s an assault of imagery that’s just too much for one film. It makes other disaster movies look focused — at least The Day After Tomorrow, for example, was just about everything freezing; here, cities fall into giant earthquakes, supervolcanoes destroy whole National Parks, and numerous other things that I can no longer even remember take their digital toll.

Put these two facts together — the poor effects work and the overabundance of ideas — and it means much of the imagery fails to impress. It either looks too fake to even begin to accept, or there’s too much going on to consider processing it, and long before the end the sheer number of massive disasters means the viewer stops being impressed by them. Even Emmerich no longer seems impressed: instead of granting huge moments the lingering wide shot they deserve, he rushes past with nary a thought — “someone said they’re about to crash into Everest, you don’t need to actually see it”.

In spite of this, one or two moments are still visually spectacular. The plane escape from a crumbling city — sorry, the first plane escape from a crumbling city (there are many) — produces a couple of incredible shots of Los Angeles disappearing into the earth, the heroes’ light aircraft dodging subway trains that burst from above them and… that kind of thing. I’ve forgotten the details, there were too many.

2012 is the very definition of spectacle. The problem is not only that Emmerich overdoes this, but he also seems to think we might care about the characters. One has to accept that such subplots are inevitable in this kind of film, even when not a single one offers something new, but they’re given too much coverage. Rather than a sketchy portrait of a separated couple who eventually get back together, or a man who has to accept he can’t save his father, or what have you, 2012 serves up multiple lengthy scenes about each. They don’t make us any more sympathetic to the characters, their familiar clichés don’t add any more depth than a brief allusion would, they just make a long film even longer — it’s closer to three hours than two for Christ’s sake.

Despite the lack of decent characterisation, actors like Chiwetel Ejiofor are endlessly watchable anyway. I personally wouldn’t count John Cusack in such an elite bunch, and certainly not Danny Glover, coming across a bit “we couldn’t afford Morgan Freeman”

as the US President, but a couple of the cast members hold the screen well enough.

The film is low on credibility throughout, then, but it finally loses any it may’ve clung on to near the climax: earthquakes big enough to swallow cities, volcanoes huge enough to obliterate states, tsunamis tall enough to crush islands… all of this we can accept — but when a mass of plebs hammer at the doors to be allowed on the humanity-saving arks, it’s the one run by Russia, China and Japan that first heed the call to allow them on. Yeah, right.

Still, thank God they scrapped the twee alternate ending, where Adrian’s father is somehow saved and the President’s daughter has some big congratulatory thing with Jackson. Though it didn’t escape my notice that the film does end with a line about the lead character’s 7-year-old daughter no longer needing nappies. Not exactly the expected final note of optimism for the future of humanity. Next time there’s a contest for “worst final line of a film ever”, this is surely a contender.

That aside, 2012 has some good bits. Heck, even the plot isn’t too bad — in its own way, for this type of super-epic sci-fi disaster movie, even if it’s a bit like the love child of The Day After Tomorrow and Knowing — but it far outstays its welcome with repetitious action sequences and dull characters. Speeding things up, aiming for an entertaining running time rather than one that screams “suitably epic!”, might’ve helped spice things up.

On the other hand, you do get more or less what you’d expect from the film. No one’s going into this thinking they’re getting a deep character piece — it’s great big spectacle all the way, and while it’s not the greatest big spectacle ever, it delivers something close enough to prevent it being the ultimate disaster of a movie — but it’s not the ultimate disaster movie either.

It’s a CGI-focused visually epic spectacular built on a story that lacks an original plot or real characterisation. Sounds familiar… Ah yes: Avatar. I’m sure those who loved Cameron’s Oscar-loser will get something from 2012 too.