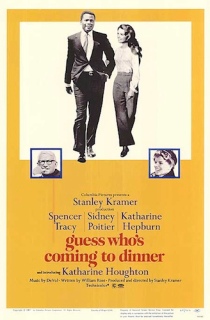 In Guess Who’s Coming to Dinner, a white girl falls in love with a black man and brings him home to meet the parents. You can almost imagine this premise still being launched today, as one of those dreadful ‘comedies’ Hollywood pumps out every year, in which the parents are outrageous racists — played by some ageing stars who should really know better — and one of the young couple is a bit accident-prone and played by someone like Ben Stiller or Adam Sandler.

Thank God for the ’60s, then, when such a plot meant this was a brave film to make. Lest we forget, this is still the era of Martin Luther King Jr. battling for equality (he was assassinated while the film was still in cinemas) and when interracial marriage was still illegal in 14 states (though that was ruled unconstitutional between filming and release). Hollywood may be known for its liberal (in US terms) politics, but it’s not always so, which makes the outcome of the film — will they or won’t they be given permission to marry? — a constant guessing game.

To write off this genuine uncertainty of outcome — a factor that’s quite rare, now and then, I think — as just a product of the film’s era is distinctly unfair, however. The Oscar-winning screenplay is truly excellent. Taking place over just a few hours on one day, it’s effectively just a series of conversations between various people (no wonder it was later turned into a stage play), but there’s never the sense that that’s all it is. The characters are fully three dimensional, thanks to the writing and excellent performances from every cast member, though Katharine Hepburn’s Oscar-winning turn is the stand out. 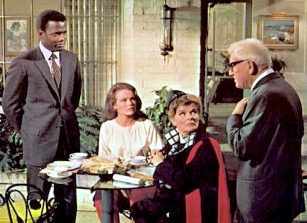 It could easily have been a simplistic message movie — these people are liberal, these people are racist, etc — but instead there’s complexity at every turn. There’s the liberal white parents who never expected to find themselves in this situation, and suddenly are struggling with their own ideologies; or the black characters, who you might think would be eager to move ‘up in the world’ but actually react even worse to the idea; or the Catholic priest being one of the few characters unwaveringly in favour of the union. And even then, these characters could just become ciphers for the arguments and debates; but they’re not, they’re characters, having believable reactions, and from this comes the debate.