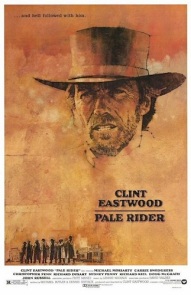 Pale Rider is, in many ways, a pretty stock Western. The plot is likely to be familiar even to those who haven’t seen a great deal of the genre: remote community, where some controlling business-type is making life hard for a bunch of everyday poor grafters; in rides a mysterious stranger, who sees the injustice of the situation; when peaceful methods don’t work, there’s the climactic shoot-out; and the mysterious stranger finally rides into the sunset/from whence he came/forever on.

Really speaking, Eastwood — in directing and starring modes — offers only one significant addition to this concept. The mysterious stranger isn’t a gunslinger, or a do-gooder, or the new sheriff, or anything else. He is, on the one hand, a preacher — “surely a man of God is opposed to violence?”, etc. — and on the other, is he even human? Either way, it’s a bit different.

The former is pretty self explanatory, so let’s take a look at the evidence for the latter. He rides into town from nowhere — or, at least, from heavenly snow-caked mountains — in the wake of a girl’s prayer, immediately coming to the defence of her surrogate father. His steed is a pale horse, which, as a Bible reading coincidentally timed to his arrival in the good guys’ camp tells us, is the ride of Death himself. He has suspiciously nasty bullet wounds all over his back. And the gun-for-hire marshall brought in by the nasty business man at the film’s climax recognises the preacher’s description,

but the person he has in mind is dead… and yet, when they come face to face, the marshall repeatedly utters, “it is you”.

The film pretty heavily suggests Eastwood’s character is some kind of spirit then, be he the avenging ghost of a dead man, or an Angel, or a Devil, or all three. But it still leaves it open — this could all just be coincidence. He doesn’t dodge bullets, or kill people with the wave of his hand, or muster a gun from thin air; indeed, he even has to go to a safe deposit box in another town to pick up his pistols. He’s capable of smashing rocks, of interacting with people, of making love apparently, and certainly of killing people. So why need he be a ghost? Why not just a man in the right place at the right time?

It’s this mystical side, particularly with its lack of definitive answer, that’s really the film’s strong point. There’s nothing particularly wrong with any of the rest — the characters are decently interesting, the acting good, the whole thing well put together, the brief flourishes of action fine enough — but it lacks a certain spark to raise it beyond the familiar elements. Aside from Eastwood playing more or less the character he always played, 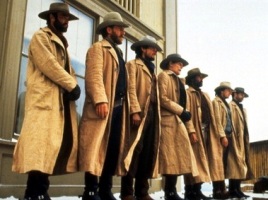 the only particularly memorable role is Sydney Penny’s naïve young teenager, Megan. Her shifting emotions and variable actions are perhaps the only parts of the story one can’t necessarily see coming from the off.

So Pale Rider may not be exceptional, but it is undoubtedly solid, doing what it does consummately. How important the mystical twist is, I couldn’t say; I imagine some viewers couldn’t care less, while others may take it as a point of debate. Really, it’s like mixing a slight extra ingredient into the stock: you might notice it, but it doesn’t change the essential flavour.