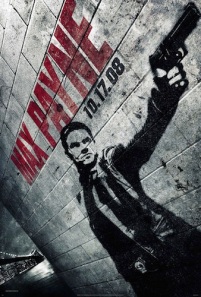 I was a bit of a gamer once. Not an especially hardcore one, but certainly a gamer. And I remember Max Payne, and I remember enjoying it, and I remember thinking it would make quite a good film, and I remember one of the biggest problems being that what made it so unique as a game was the bullet-time feature and what would make it so derivative as a film would be to use bullet-time. But it also had lots of other things going for it: the snow-bound nighttime New York setting, the dark revenge plot, the hard-boiled gravel-toned voiceover.

Luckily, director John Moore doesn’t use Matrix-derived bullet-time visuals, but, despite keeping a snow-bound New York and a revenge plot, he’s somehow managed to also throw out everything that made Max Payne: The Game good. Despite the similarities in plot and setting, this doesn’t feel at all like the game.

Max Payne: The Film, to put it simply, is a load of crap.

For something advertised as an action movie — at best, an action-thriller — there’s barely any action. Even the climax, where you might expect a fair bit, is virtually devoid of it. Moore exploits extreme slow motion to stand in for the game’s Matrix-esque combat. 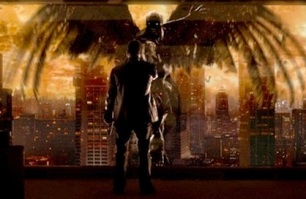 Unfortunately, he seems to be under the illusion that a couple of barely-moving slow-mo moments also stand in for a full action sequence. When an action movie can’t deliver any action, there’s a problem.

Instead, the budget seems to have been spent on some angel/demon CGI rubbish. Early on, one begins to wonder if the film’s headed toward Constantine-esque fantasy territory — it’s not in the game, but hey, that’s never bothered Uwe Boll. Eventually it becomes clear it isn’t, these are just some kind of junkie visions. At least, I’m sure they’re meant to be, but I’m not sure the film ever makes that explicit — I wouldn’t blame a casual viewer going away with the sense that these angel/demon/things are actually meant to be there and only the junkies can see them. Which would be just as irrelevant.

Despite this being the “Harder Cut”, it comes across as a PG-13 film playing at being an R. (Though the extended cut was released as ‘unrated’ in the US, the original MPAA rating was an R before a handful of changes needed to get it down to the more bankable PG-13.) It’s now around three minutes longer than the theatrical cut, but from what I can gather a significant chunk of that seems to be made up of people walking around longer.

The ‘harder’ bit merely comes from a couple of frames (literally) of violence and the odd bit of CG blood. Presumably the extra walking around is to artificially lengthen the running time and persuade the more gullible that they’re getting a tougher experience.

Mark Wahlberg has all the charisma and emotion of a wooden plank. No one else in the cast can offer anything better, least of all a miscast Mila Kunis. In fairness, it’s not like any of them are given proper characters to work with: most display no kind of arc, and even those that have one — Kunis, for example — are ultimately ignored, the events that might affect them on an emotional level serving only to further what stands in for a plot. Only Max himself is allowed any genuine emotional connection. And by “genuine” I mean some supporting characters we never see again tell us it’s had a real impact on him. Wahlberg certainly doesn’t convey it.

Olga Kurylenko is also in this film. She tries to sleep with the hero and fails, as per usual.

At least some of it looks quite nice. The drifting snow-laden exterior shots are among the few bits of the film that might genuinely be considered good. But when you can get pretty images elsewhere, why suffer through this?

A short post-credits scene suggests a sequel. Why is this buried after the credits? Presumably so as the filmmakers didn’t embarrass themselves more widely by implying they thought this pathetic effort might earn itself a follow-up.

Uwe Boll wanted to get his hands on Max Payne. At times while watching this, I wished he had. You can’t get much more damning than that. Other than, maybe, something witty, like — “maximum pain is certainly what this film will cause you”.

Max Payne featured on my list of The Five Worst Films I Saw in 2010, which can be read in full here.