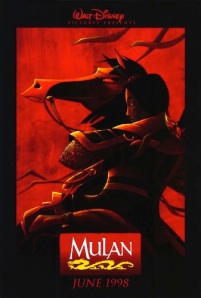 I realised recently that I haven’t seen an animated Disney film produced after The Hunchback of Notre Dame, which I saw on rented video thinking I was probably getting too old for the Mouse House’s output. Now I’ve grown up, of course, I know you’re never too old for a good Disney. As Mulan seems to be one of their last to gather significant praise before they slipped into their ’00s rut, it seemed a good place to begin catching up on what I’d missed.

It’s easy to see what critics and/or audiences liked about Mulan. There’s a few good, catchy songs — though sadly no villain’s song, which is usually one of the highlights — and some lovely animation — though I feel it’s been rather outshone by the similarly-styled Kung Fu Panda in this regard. There are decent action sequences too, fast-paced and fluidly animated, which helps make what could’ve been a Girly Film into something palatable to both genders (I remember being distinctly unimpressed with Pocahontas when forced to see it in the cinema).

The other thing that stands out about Mulan, particularly now, is how very Americanised it is. That’s nothing new for Disney, of course, but it feels a little odd these days. When we’re so used to increased attempts at appropriate cultural reverence from Hollywood movies, it’s almost uncomfortable to hear such American accents from clearly Chinese characters. 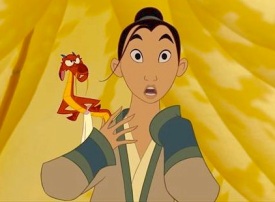 (It’s this kind of thing that has caused uproar for The Last Airbender in the US (quite aside from it supposedly being a load of cobblers). How times change.) Eddie Murphy’s Mushu (who now comes across a little like a proto-Donkey) is particularly incongruous in this regard. I suppose it’s no worse than, say, Aladdin, or The Jungle Book, or all the Euro-set films.

With a ‘princess’ overcoming her assigned place, a pair of cute/humorous animal sidekicks, a princely husband-to-be, and a vicious villain in need of defeating, the tale of Mulan has certainly been adapted into the Disney mould. It may not be their best effort, but it’s still a strong one.