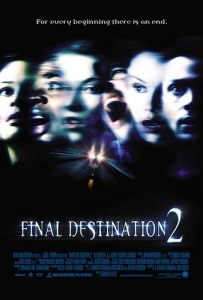 Final Destination 2 is daft. The concept’s daft, the new additions are daft, the characters are daft, and most of all the deaths are daft. And that’s why it’s an awful lot of fun.

If you’ve seen the first film (or read about the series ever) you’ll know the setup: girl has premonition of Big Accident — which, as a viewer, we’re treated to in all its gory detail — does something to save herself and group of strangers from dying in said accident, then they’re all picked off one-by-one by Death. We never actually see Death, but there’s no doubting that this isn’t just a helluva coincidence — there are rules and everything.

The rules don’t really matter. I mean, they do to the characters, and therefore to the plot — the whole climax is dependent on one of the new rules which, in spite of criticism from some fans (yep, the Final Destination series has fans), is actually a reasonable extension of the concept — but they don’t really matter to the viewer. What matters to the viewer is the deaths — the increasingly creative ways the writers/directors/producers/effects guys/stunt team/whoever have dreamt up to off the various characters. If this sounds unpalatable, the series probably isn’t for you.

To say any more about the deaths, then, would be to ruin the film. Trust that they are suitable inventive, occasionally surprising — there’s a neat twist in who the first handful of victims are — and the build up to each littered with red herrings and misdirections. Screenwriters J. Mackye Gruber and Eric Bress and director David R. Ellis (previously of Homeward Bound II: Lost in San Francisco — you can see how he got from that to two Final Destinations and Snakes on a Plane, right?) are all too aware that

half the fun for the viewer lies in guessing what’s about to happen, and so scatter clues and hints to give us a fighting chance… something they don’t afford many of the characters, of course.

I use the word “characters” loosely. Most exist to be bumped off. Normally this would be dull, and if you’re really interested in where this concept might be taken — and, let’s be honest, it’s a potentially interesting and explorable concept — their lack of depth or interest may be distracting. But Final Destination, as a series, doesn’t promise depth or insight; it promises death. Inventive, funny death. Everyone one of them, incidentally, made me laugh out loud. Which is kind of sick, really; but it’s the ridiculously convoluted way each demise is brought about, and the OTT gore with which they’re inevitably executed, that meant I couldn’t help laughing at the filmmakers’ particular brand of audaciousness.

So yes, it’s all daft. And it’s probably a watch-once affair, because once you know what’s coming half the fun’s gone. (This is presumably why they’re doing OK in churning them out — audiences aren’t as interested in revisiting the films as they are in seeing the new ways people can be massacred.) But on this one viewing — which is pleasantly brief at under 90 minutes — I had fun. Daft fun of dubious morals, but fun nonetheless.