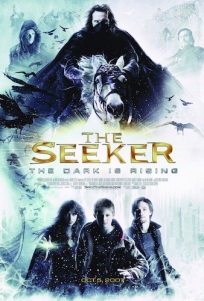 Harry Potter has a lot to answer for. By taking a successful children’s book and turning it into a billion-dollar film franchise, Warner Bros inadvertently suggested everyone else try the same with every kids’ book series they could get their hands on. The Chronicles of Narnia, The Golden Compass, Inkheart, Twilight — for better or worse, it’s all Potter’s fault.

And so, of course, is the awkwardly titled The Seeker: The Dark is Rising, allegedly based on Susan Cooper’s five-volume fantasy series, The Dark is Rising, and specifically the second novel, The Dark is Rising. Changes from book to screen abound, however, though I’m no authority to list them — I’ve only read the first book, and that was many years ago — but there’s no sign of an Arthurian influence or Cornish setting (things I’m informed the books are concerned with). In fact, it’s specifically set near London, because, of course, Britain is only London; and the lead character is changed to an ex-pat American, because, of course, Americans would never go to see a fantasy movie starring a British kid.

Fan-baiting changes aren’t the only things wrong with the film, though. For much of the first half I was almost considering a scene-by-scene account of the irritations and weaknesses, but that would mean watching it again. So, for a few of the problems: the dialogue is frequently clunky, either with stock fantasy phrasing or plain old implausible utterances; the acting is variable, in particular the irritating children, but even Christopher Eccleston fails to do much decent with his villain role; the story is ill thought out,

with conflicting or logic-less motivations and a quest structure that requires no skill (the titular Seeker has to find six ‘signs’ — i.e. little magic MacGuffins — a task which seems to involve waiting around until one falls into his hands, sometimes literally); Cunningham’s direction is over enthusiastic, throwing in jaunty angles and varied film speeds like it’s been outlawed to use a straight shot at 24 frames per second.

It’s also almost entirely devoid of humour, which isn’t necessarily a bad thing but doesn’t exactly help. About the best joke is that the Rider’s primary disguise amongst regular folk is a doctor, and he’s played by Chris Eccleston, who had just been The Doctor.

And if I’m nitpicking, that poster is pretty thoroughly unrepresentative. The guy on the top left isn’t even in it (they cut a whole character, I presume that’s him), while the two flanking our hero at the bottom are also minor roles; and, anyway (spoilers!) are both bad guys. Sort of. A bit. Well, look, they’re not even close to being as much of a trio as that poster implies. At any point.

Yet for all that, it’s not all bad. The film is actually awash with great (or potentially great) moments, sequences and ideas. Considering how weak other parts are,

it’s easy to assume the good bits must have occurred by accident, or be left-overs from the novel. Equally, as most occur in the film’s second half, the damage has already been done. They also don’t negate the fact that exciting or inventive action scenes don’t make up for a plot that leaves them bereft of character development, emotion, or truly genuine thrills.

If you’re a fan of the books, I imagine you already know to stay well clear. For the rest of us, The Dark is Rising might be worth a single watch for the sake of a handful of these appreciable scenes, but after suffering through the objectionable performances and pondering the unsatisfying storytelling, you’ll wish they’d found their way into a movie that was more deserving.

The Seeker: The Dark is Rising featured on my list of The Five Worst Films I Saw in 2010, which can be read in full here.