Born Free tells the true story of Joy and George Adamson, a Senior Game Warden in 1950s Kenya, who adopted three lion cubs after mistakenly killing their mother. Though they give two away to a zoo, Joy can’t bear to part with one, Elsa, and so they raise her — until circumstances force them to part with her. Despite Elsa’s age, Joy insists they try to release her into the wild rather than send her to a zoo.

Though obviously scripted, acted and directed as a drama, the film nonetheless often plays like a documentary. Partly this is because it’s based on a true story, so (allowing for dramatic licence) we know it happened, emphasised by an occasionally episodic narrative and Joy’s voiceover narration; and partly because the plentiful wildlife footage is real. The film benefits in this respect from being made in an era before animatronics or CGI could be used to have the animals do whatever the filmmakers wanted. It makes the storytelling that much more impressive and complements the ‘true story’ angle.

I don’t know how trained the lions used were, but all their actions come across as entirely naturalistic, be it playing early on or attempting to fit into the wild later. It’s easy to see why this is a classic for animal lovers: the constantly playful cubs are are delight, the affectionate older Elsa endearing, the attempts to release her ethologically engaging… 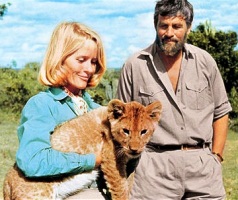 Then there are the other animals, including elephants (always wonderful) and the Adamsons’ adorable pet… rodent… (look, I’m no expert.) Best of all is a head-butting warthog, who has instantly become my favourite film animal. The entire film was worth that sequence.

It might be kindest to say the script and acting are often “of their era”, the plummy British accents appropriate but also instantly dating. Not that it matters a jot, because the film isn’t really about the people, it’s about the animals they look after and peripherally how the humans’ lives impact on that care. Those that don’t give a monkeys about wildlife films may wish to subtract a star (or three); for everyone else, it’s delightful.

Tomorrow, my thoughts on the sequel, Living Free.