Robin Williams surprised everyone when he started appearing in films as a serious actor in the early ’00s. Previously — and, if you’ve seen him on chat show in recent years, still — an outrageous funnyman, Williams turned in excellent straight performances in the likes of Insomnia and, particularly, One Hour Photo. The Night Listener very much follows in this vein, casting Williams as radio host and author Gabriel Noone, who begins a correspondence friendship with a terminally ill abused boy, Pete, and his carer, Donna, either of whom may not be real…

What sounds like an intriguing concept is actually based on a true story — from what I’ve read, it’s pretty close to it, albeit with fictionalised versions of the real people and a more definite idea of What’s Really Going On — and is executed with good performances, a well-paced screenplay and direction that renders the film tense or mystifying when it needs to be. Sadly it seems to go nowhere, the mystery fizzling out and the characters gaining little from the experience. It’s not that it needs to have a big twist or a complicated reveal or any of those thriller-ish things — it doesn’t even need to be conclusive necessarily (and it isn’t) — but I wasn’t sure of its dramatic point. It’s one of those mystery-thrillers that you can watch once and be intrigued by, but once the answers (such as they are) are provided, there seems little reason to return. 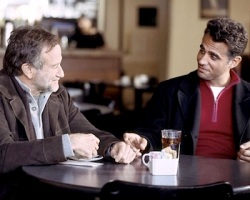 Still, Robin Williams is excellent, once again displaying his recently-found gift for serious acting. His character’s homosexuality is nicely handled too. It seems to have overshadowed the rest of the film for some viewers, but I’m confused as to why. Perhaps precisely because it doesn’t come out screaming “look, look, he’s gay! Isn’t that edgy!”, leaving it as just a fact of his character — and one that’s only important because his personal life is part of the story — means some viewers are so shocked by their own realisation of his sexual orientation that it gets in the way for them.

As for the other characters (and here be those spoilers), it’s hard to suss out Donna’s motivations for targeting Gabriel. Her illness is understandable on a small scale — convincing townsfolk, etc — but why go to the trouble of penning a whole biography/novel, getting bloody lucky that it was just accepted outright by a publisher, and at the publisher Gabriel was signed to too (presumably), and then it being put into his hands… Why did she go to all that risk? Was it all accidental? She was certainly lucky it went so well and so far, so maybe she didn’t expect it to? I don’t know. I’m not sure the film does either.

And for all that, this is a case of Truth Is Stranger Than Fiction because, though fictionalised, that sequence of events is entirely based on stuff that really happened to author and co-screenwriter Armistead Maupin. The downside is,

this “but it happened!” logic seems to allow the filmmakers to get away with not offering adequate explanation. Then again (not sure how many “other hand”s I’m on now), it’s just like real-life: sometimes things can’t be explained in a rational way. Some people will have a problem with that from their films; sometimes I’m among them, but in this instance I think there are enough explanations and ambiguities. My problem was more that getting to them seemed to provide nothing, particularly as, being twist-free, they only confirmed one of the options that had been supposed an hour earlier.

Perhaps The Night Listener is actually meant to be a character drama — the effect events have on Gabriel being more important than the veracity of Donna’s story — but Stettner takes the mystery element and runs with it, turning in a thriller that’s often not especially thrilling. While many bits do work, and work very well, by the end it doesn’t seem to gel into a cohesive whole. Those after something primarily thought-provoking may find themselves adding an extra star; those interested in a conclusive or pacey thriller may wish to subtract one.