Benjamin Button was released in UK cinemas two years ago last week. Time really does fly. The critical reception was a little divisive — the Rotten Tomatoes score is 72%, which is good but hardly outstanding, and reviews even by notable critics range from ones to fives and everything in between. It seemed to me there was a bigger backlash a little later, giving the impression it wasn’t as good as it had been cracked up to be. Still, it was nominated for 13 Oscars, winning three.

That’s as good a place to start as any, because those three wins were for Art Direction, Makeup and Visual Effects. Unusual for a Drama to win for visual effects, but even the film’s staunchest critic surely wouldn’t deny its right to claim victory in those categories. As you undoubtedly know, Benjamin Button is born as an 80-something year old man and ages backwards to a baby. In between, he’s almost entirely played by Brad Pitt, or other actors/models/semi-CGI creations with Brad Pitt’s face. The integration of Pitt into the CG faces of old-Benjamin is astounding good; so much so, in fact, that you almost can’t help but look for faults and joins. Even at its least convincing, however, it’s no worse than very good old-age makeup. Later, as Benjamin gets younger, the digital smoothing de-ages him well too — aided, it must be said, by plenty of shadows. Nonetheless, it’s a lot more convincing than the only other examples I’ve seen, namely Patrick Stewart and Ian McKellen in X-Men: The Last Stand and Wolverine.

The visuals in general may be Benjamin Button’s strongpoint, holding up a variety of era-evoking colour palettes and other design elements as it passes throughout the 20th Century. Flashback-like asides are conveyed in older film styles — scratchy prints for instance, or with a silent movie aesthetic — that on the one hand could seem an inappropriate indulgence, but objectively work very nicely. For a director who has a reputation in some corners for exhibiting excessive flair with swish shots and effects, Fincher shows steady restraint here — as he did in Zodiac, and Se7en, and all the moments in his other films where it was appropriate.

But what of the story this is all in aid of telling? As noted, Benjamin Button is the story of a life, right from birth through to death. Few biopics take such wide a scope, ending before the end or picking up some way from the beginning. Naturally such a tale can become episodic — who plausibly lives a life that throughout conforms to a neat three-act structure? — but it nonetheless ties together with the main thread of Benjamin’s relationship with Daisy, not to mention the primary thematic element: love, in various forms — fatherly, matey, sexual, everlasting…

Many comparisons have been made to Forrest Gump, in no small part because both were adapted for the screen by Eric Roth. I’ve not seen that in a very long time, 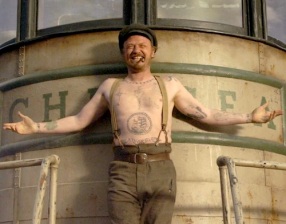 but Button didn’t feel nearly as episodic, nor nearly so obsessed with History. Benjamin encounters foreign diplomats and is embroiled in World War 2, but both are relatively non-specific and don’t colour his life in the way Gump’s parade of Defining Moments do. Instead the storytelling is character focused. Viewer awareness of time passing in the narrative is left to the odd snippet of dialogue or obvious jump; aside from a few clear points, there’s a less convincing sense of era than Fincher evoked in Zodiac. Whether this matters or not is debatable — Button isn’t a chronicle of the 20th Century through one man’s eyes, which is what Gump arguably was, but is rather the story of a (somewhat unusual) life lived during that timed period.

And I say only “somewhat” unusual because, actually, a lot of Benjamin’s story might just as well be imagined with a life that runs forwards. The fact that he’s ageing backwards colours events, certainly; it gives it the surface sheen of a more unusual story; it gives motivations for some of his actions — such as leaving the woman he truly loves and their one-year-old daughter — but if he was a regular orphaned boy, it wouldn’t take much extra creativity to see the same tale work. But the devil is in the details, as they say, and so maybe more would be lost than I’m perceiving.

Or perhaps it’s the very point: the more things change, the more they stay the same. Benjamin is ageing in completely the opposite direction to the rest of us, and yet his life isn’t all that different. Witness the end of the film (naturally, spoilers follow): Benjamin loses his language and memory, his life fading away as his brain fails. Presumably this is because he’s regressing to childhood, his brain shrinking and devolving to that of a child/toddler/newborn, but don’t we see the same thing happen to adults with dementia? As Daisy observes earlier in the film, “we all end up in diapers”. A life backwards is not so different to a life forwards, then. It’s all in how you live it, that kind of thing.

And speaking of death, there’s an awful lot of it about in Benjamin Button. He grows up in an old people’s home; most of the people he knows there die. It ends by detailing his final years, his gradual slide to death. Threaded throughout is the tale of Daisy’s death, in a hospital right before Hurricane Katrina hits — a natural disaster which claimed almost 2,000 lives. For a film that’s about A Life, this seems like rather a lot of the other. Either it’s me reading a lot of death into it, for whatever reason, or that’s something else it has to say: life is defined by death. As one character comments, “Benjamin, we’re meant to lose the people we love. How else would we know how important they are to us?”

Ultimately, Benjamin Button strikes me as less than the sum of its parts. Bits are good, even very good — “bits” both as in story episodes and technical elements; and I particularly like the sections with Jared Harris, who’s always worth watching — but what does it add up to? It’s quite long and, unlike Zodiac, feels it. It may be easy to admire, but I find it awkward to love.

I watched The Curious Case of Benjamin Button as part of a David Fincher Week. Read my thoughts on all his films to date here.