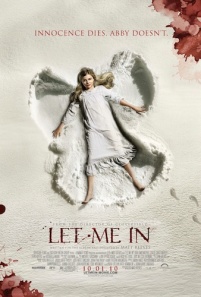 Owen is a 12-year-old loner in New Mexico in 1983, spending his days at school being bullied and filling his evenings spying on his neighbours. Then a girl, Abby, and her father move in next door and it looks like he might finally make a friend.

Doesn’t sound like the setup for a vampire movie, does it? Unless you’ve seen Let the Right One In, in which case it’s very much the-same-but-different. Indeed, it’s so much the same that one’s thoughts naturally gravitate to the occasions where it does differ. This may be doing the film a disservice, but I’m tempted to say “serves them right” for remaking it so damn fast and making it so damn similar. Some have asserted that it’s the same film for those who can’t handle reading subtitles. It’s not that bad, but you can see where they’re coming from.

Writer-director Reeves establishes that this isn’t exactly the same from the start: we get a title card to inform us it’s 1983, whereas the original left the era almost incidental as background detail; and then it begins halfway through the story. This is presumably because it’s a recently-made American/Hollywood low-key genre film and that’s one of their rules. It also introduces a new character, a detective who will play a larger role in the film that follows. Not that large, though; fore-fronting him in this way draws attention that he might not garner otherwise. Is it deserved? Debate among yourselves.

The nighttime scenes are bathed in the orange glow of street-lighting, a nice choice of colour scheme as it’s evocative of the real world, especially as it’s not unnaturally overdone: the colour is abundant where there is such lighting, but more natural tones are used in forests, etc. It also provides a very different feel to the original, where a more white, snow-emphasising light was adopted throughout. Despite its realism, though, such a solidly orange palette does make the US one feel more visually stylised. Ironic.

Secondary adult characters are pared back (with the exception of that police officer). Owen’s parents are all but removed — you never really see his mum’s face and only hear his dad down the phone — and they all seem to have roles (teacher, neighbour, etc) rather than names. The fact that some key characters are stripped of their names — most notably, Abby’s ‘dad’ — while others retain theirs (as per the credits, at least) makes it seem like a thematic point that wound up half-arsed. Reeves makes minor additions to the story elsewhere. We visit the pool earlier, for instance, where Owen doesn’t swim, which makes the climactic pay-off even sweeter. 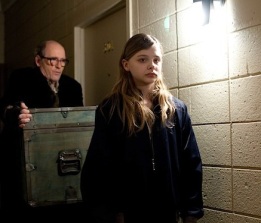 Despite it being easier to spot omissions than additions, Reeves’ film runs the same length as the original and feels faster moving. This may just be because I knew the story well, watching both versions just 24 hours apart, but some things are quantifiable: as well as far fewer scenes with the neighbours — in the original, characters; here, victim-extras — there’s also fewer arty shots of scenery, which helped give the original its sedate arthouse tone. What’s taken the place of all these things? Scenes from the novel, you might think, but from what I’ve read it’s faithful to the film more than novel — stuff I’ve read about being in the novel but not the Swedish film hasn’t been reinstated here either.

There are some notable changes to significant traits of the main characters: Owen finding very old photos of Abby with another boy suggests this is definitely her helper-finding MO; Owen is no longer obsessed with death (no file of newspaper clippings) and doesn’t carry his knife as much — for instance, when the policeman finds Abby asleep in the bath, instead of threatening him with the knife Owen just says “wait!” Minor tweaks? Maybe, but I think it removes some nice nuance, complexity and ambiguity.

Another notable change is the sexual element. It factors even earlier, with Owen voyeuristically observing it all around him — spying on neighbours as they begin to get it on, watching a young couple kissing in the shop, etc.

It seems he isn’t innocent in the same way Oskar was, that Reeves is building up his awareness of sexuality… but then he asks Abby to go steady and he still considers it to mean you don’t “do anything special”. What? Also, if she says “I’m not a girl”, surely the logical response is “you’re a boy?!”, not “what are you?” — especially if the only answer she’ll give is “I’m nothing”. But she’s not a boy — probably. It’s not explicit, but she seems much girlier, and of course it would remove any dangerous homosexual element. Or possibly they just wanted to make damn sure they didn’t need to include The Crotch Shot. Considering they’ve changed the bully’s teasing of Owen from “piggy” to “little girl”, it seems even more obvious a shame to have stripped Abby of her androgyny. Unless that’s the point? They tease Owen about being a little girl, before getting their asses kicked — or, rather, bodies ripped apart — by one.

The worst thing about Let Me In, though, is that any time there’s a scene that’s a direct lift from the original, it feels less well played, by the director, by the cast and sometimes, despite the faithfulness, by the screenplay. The aforementioned swimming pool climax is a case in point: the original version is perfect, but directly copying it would be a no no, so instead Reeves jazzes it up… and, unsurprisingly, it doesn’t work half as well. You can’t improve on perfection.

Similarly, the CGI is overdone throughout. It’s not bad per se, just used too overtly. Whereas the original remained grounded and (perhaps surprisingly) plausible, Reeves occasionally indulges in more stereotypical horror movie excess — take Abby’s first attack in the underpass, for instance: superficially similar, but in this version a computer-aided Abby flies all over the place. It draws attention to its has-to-be-fakery and is therefore a less effective sequence.

As I mentioned in my other review, choices for cuts to the novel for the original adaptation were partly about getting it past censors but also about making the story work as a film, and all were made by the original author. This is probably why Let Me In reproduces the film version so faithfully, rather than re-adding bits from the novel: when the original author has already approved cuts, why re-do the job? The answer might be “to offer something different” — a valid consideration, I think, when you’re remaking a work so soon after the original — but you can see why Reeves didn’t. Of course, being American, it censors the tale further (losing any potential homosexual undercurrent, references (visual or otherwise) to castration, etc).

It’s probably unfair to judge Let Me In by watching it so close to the Swedish version. I expect it benefits from a bit of distance. It’s still a well-made film, still an unusual take on a familiar genre. But it is — obviously — not as original or innovative. It’s also not as well acted, not as nuanced, not as beautifully made — the images Reeves conjures up do not burn themselves into your mind in the way so many from the original do.

If you’ve not seen the original, I’d wager it comes across a lot better. But do yourself a favour and watch the original first — you wouldn’t want the inferior version to ruin any of its surprises, would you.

See also my comparison of this and the Swedish original, Let the Right One In, here.

Let Me In is out on UK DVD and Blu-ray today.