Oskar is a 12-year-old loner in Sweden in 1982, spending his days at school being bullied and filling his evenings with fantasies of revenge. Then a girl, Eli, and her father move in next door and it looks like he might finally make a friend.

Doesn’t sound like the setup for a vampire movie, does it? But, as you’re no doubt aware thanks to all the awards its won and praise its received in the past two years, Let the Right One In isn’t your typical vampire movie. If you’ve somehow managed to avoid hearing anything about it in that time, I encourage you to watch it before reading more — it’s hard to discuss any of it without spoiling at least some. Knowing it’s a vampire movie is too much, to be frank — it’d be grand to be able to see this completely cold.

And “cold” is an apt word (smooth link, eh?) as one of the many things that seems to mark the film out is the abundance of snow. We’re used to vampire films being Dark, visually, due to the necessity of a nighttime setting, but here the snow-covered locale makes most of the night scenes bright and white. Alfredson emphasises this with wide compositions that fill the frame with the white stuff.

Even more unconventional is the film’s treatment of vampires themselves. It’s not uncommon for tales to Do Vampires Differently by changing the basic rules, but Let the Right One In sticks to them — they drink blood, typically from the neck, can’t enter without invitation, burn up in sunlight, can fly — and changes the myth in less showy but more fundamental ways. 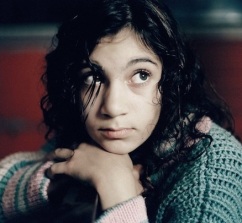 For instance, when the usual skills do crop up, they’re presented in a very grounded way — any CGI required is used subtly and incredibly effectively — or kept off screen. They’re at the best when used to slightly emphasise Eli’s weirdness — the way she drops ever so slightly slower than is natural from the climbing frame when she first meets Oskar, or to shape and manipulate her face almost imperceptibly at times.

Primarily, however, most vampire films glamorise their lifestyle in one way or another, even when they’re the villains; this is especially bad right now, with the likes of Twilight befouling our culture, but it’s nothing new. But being a vampire Let the Right One In-style is no fun at all, characterised by painful hunger, the difficulty of getting food undetected, guilt after successfully feeding, and, perhaps worst of all, loneliness.

Loneliness is the real key to the film because, even with all the horror — and the film is scary when appropriate — this is about two lonely outsider kids finding each other and getting something they were previously lacking from that newfound human contact. It’s a romance, in fact; a mixture of first love and true, pure (read: sexless) love. Though that’s not entirely true — it’s more complicated than that. 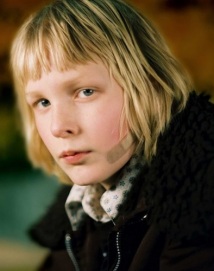 The story’s central relationships — mainly, Eli/Oskar and Eli/Håkan, he being the ‘dad’ figure who helps Eli survive — can be read various ways. The author/screenwriter, John Ajvide Lindqvist, has one interpretation — indeed, based on what I’ve read, the novel is quite clear on these points — but the film leaves many facts ambiguous. Is Håkan related to Eli? Does he love her? In what way? Does she love him? Does she even like him? Is he just a facilitator? Was he once in Oskar’s position? If he was, is she just manipulating Oskar? Or is it really love? Or is it just friendship? The joy of such well-placed ambiguities in a story is that each viewer can bring their own interpretation, without anyone being clearly right or wrong and without undermining the quality of the story being told. I think I know what I think; but, just as much, I enjoy the fact there are numerous possibilities. (Of course, equally valid is the argument that there are no ambiguities because most if not all have been cleared up Lindqvist and/or Alfredson in interviews. But where’s the fun in that?)

I said it was “sexless love”. Perhaps, though sex is certainly a theme — not only because it always is with vampires (the intrusive nature of what they do & all that), but also witness the scene where Eli clambers into bed with Oskar naked, or when he catches a glimpse of her changing and we get a rather explicit close-up. They’re both 12-year-olds, it’s easy to see why some/many/most would be wary of touching on any sexual overtones in the film, but they’re definitely there. Interestingly, Oskar is every inch the innocent, with his white-blonde hair, pale skin, cherub face, with it’s slight-but-heartfelt flickers of emotion, be that joy or triumph or sadness; to whom ‘going steady’ with a girl means nothing changes and you don’t do anything special. Does that negate the film’s sexuality? Or does it just mean Oskar is the antithesis of the corrupted Eli?

Though most of Let the Right One In’s irregular take on vampires seems genuinely unique, one of those unusual elements — a 12-year-old girl being a vampire — immediately draws comparison to Interview with the Vampire. However, unlike that novel/film’s child bloodsucker Claudia (Kirsten Dunst’s character), who becomes an increasingly older woman trapped in a child’s body, Eli seems to have remained 12 — just like she says — even though she has existed for a very long time. Which version is more plausible? Well, let’s put it this way: vampires don’t exist. Duh. Both work for their respective points; neither disqualifies the other from being an interesting take on the creatures.

Another interesting point I learnt while reading up on the film is that Lindqvist’s novel is, apparently, somewhat autobiographical (aside from the vampire stuff, obviously). Oskar is Lindqvist, essentially, and it seems Alfredson could relate too. Perhaps this is what helps it feel so true. The character stuff, I mean, not the vampire stuff. Maybe that’s why Let Me In struggles to translate the tale as effectively: it’s taking a story set in a specific time and place for a reason (Lindqvist was 13 in 1982; plus it’s a year that has other significance for Sweden), and mashing it into a different one by someone who, maybe, doesn’t have quite as personal a connection as the previous authors.

I haven’t read the source novel so can’t make a comparison. Lindqvist adapted his own novel, making cuts partly to get past censors — one article I read asserted that,

if they’d filmed some of the stuff in the novel, the filmmakers would’ve gone to prison — but also about refocussing the story to be a two-hour film instead of a novel. I’m not sure, therefore, how faithful the climax is, but it’s a sequence that seems made for the screen. I shan’t say much more on this point, just in case you’ve not seen the film and still read this far (tsk tsk), but it seems having a vampire for a best friend is a great way to deal with bullies.

Winning many awards and garnering much praise can sometimes hamper a film — especially when its hailed as an outstandingly innovative take on something familiar — but Let the Right One In manages to live up to this promise. It’s a horror movie and a character drama and does neither by halves, instead combining the two to transcend genre boundaries and just become bloody good.

Let the Right One In placed 3rd on my list of The Ten Best Films I Saw For the First Time in 2011, which can be read in full here.

See also my comparison of this and its US remake, Let Me In, here.