It used to take Hollywood ages to churn out a remake of a foreign film. Les diaboliques and Diabolique? 41 years. À bout de souffle and Breathless? 23 years. Insomnia and Insomnia? Five years. But increasingly nothing like as long is needed. I suppose we can thank a more globalised film culture brought about in the last decade (ish) by a combination of the internet and readily-importable, quickly-released DVDs/Blu-rays; ways for learning of, reading about and seeing films that weren’t a factor even in the VHS era, let alone earlier. 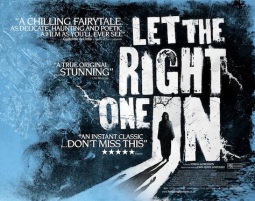 The most recent example of this speedy-remake phenomenon is Swedish vampire drama Let the Right One In, remade last year by the recently-relaunched Hammer Films as Let Me In. Or, if you prefer, “re-adapted”, as they’re both based on a 2004 novel by John Ajvide Lindqvist. A film of a Swedish novel produced by a British company set in America with a US cast & crew? Globalised indeed. The gap between the films, by-the-way, is just two years.

Me being me, it’s taken until now to see either. But make hay while the sun shines, because this allows me to watch them almost back-to-back and see what I think. First off, then, and of course, is Låt den rätte komma in…

Lindqvist’s novel is, apparently, autobiographical. Oskar is Lindqvist, essentially, and it seems Alfredson could relate too. Perhaps this is what helps it feel so true. Maybe that’s why Let Me In struggles to translate the tale as effectively: it’s taking a story set in a specific time and place for a reason, and mashing it into a different one by someone who, maybe, doesn’t have quite as personal a connection as the previous authors.

Read my full review here. And then follow it with…

any time there’s a scene that’s a direct lift from the original, it feels less well played, by the director, by the cast and sometimes, despite the faithfulness, by the screenplay. The aforementioned swimming pool climax is a case in point: the original version is perfect, but directly copying it would be a no no, so instead Reeves jazzes it up… and, unsurprisingly, it doesn’t work half as well. You can’t improve on perfection.

I’m not one of those people who prefers the original just because It’s The Original, so hopefully it means something (as much as my opinion ever does) when I say that Let the Right One In is the better of these two films. It feels like Alfredson set out to make a drama about young love that happened to feature a potentially violent loner and a vampire girl — 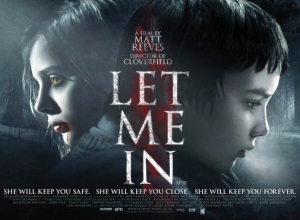 in fact, the director is keen to point out (in a surprisingly unpretentious fashion) that he doesn’t aim his work to slot into any particular genre — while Reeves set out to make a horror movie first and a young-love drama second. Though don’t go expecting out-and-out vampire thrills and gore from Let Me In, because it retains enough of the original’s DNA to make it still a pleasantly unusual genre entry.

Some viewers prefer the remake. I can’t see it myself. Maybe viewed in isolation it would seem better, but watched almost back to back it felt like Let Me In lost the original’s nuance. It’s not as dreadful as a Van Sant Psycho-style retread, but it’s still a pale reflection of its inspiration. Ironic for a vampire film.

(Let the Right One In placed 3rd on my list of The Ten Best Films I Saw For the First Time in 2011, which can be read in full here.)