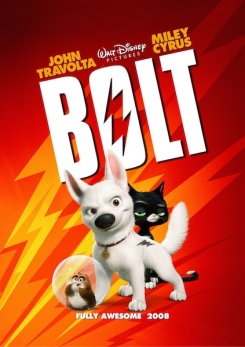 Bolt is the 48th film in Disney’s animated canon (whatever the official name for that is these days), from their CG-only era that filled most of the ’00s. It’s a period already remembered as When Disney Lost Its Way, after the second (or is it third? I forget) ‘golden era’ of the early ’90s; the time that produced flops like Treasure Planet, Home on the Range and Meet the Robinsons. Things are looking up — it’s been followed by The Princess and the Frog, where a return to 2D animation distinctly marked a more widespread change of direction, and the praised Tangled — but it may be Bolt that comes to be seen as the true turning point, because it’s actually rather good.

Let’s get the worst bit out of the way first: thankfully, Miley Cyrus’ part is quite small. She’s adequate, but one suspects she got roped in because a) Disney were already trying to find a way to continue making money out of her post-Hannah Montana, and b) she provided a surefire-selling song for the end credits. Chloë Moretz reportedly recorded all of Penny’s dialogue before Cyrus was brought in; one can’t help but feel that, age-wise (and probably acting-ability-wise too), she would’ve been a better fit for the character.

But it’s not about Penny, it’s about Bolt, and he is excellently realised. Bolt, if you don’t know, is a dog, and the animators have captured dogs’ behaviour perfectly. It’s not just the obvious things, as seen during the sequence where Mittens the cat trains him to be a ‘regular dog’, but all the little mannerisms throughout. The animals are anthropomorphised, of course, but they’re not just animal-shaped-humans; they’re what these animals would be like if they could talk. Crossed with humans, anyway.

Also noteworthy are the action sequences. Far from being perfunctory attempts at liveliness, these are properly exciting, making full use of 3D CGI to create exciting and dynamic sequences. I’m not just talking about the couple we get from the TV-series-within-the-film either, but also the ‘real world’ ones as Bolt, Mittens and Rhino jump onto trains, out of moving vans, escape from a pound, etc. Of course, the TV-series-within-the-film is completely implausible — like you could film a TV show with massive action sequences in such a way that you only ever do a single take, never mind achieve all those effects on a TV budget. But then this is a film where a talking dog, cat and hamster work together to travel from New York to Hollywood entirely of their own volition — I think it’s safe to say no one’s aiming for documentary levels of realism.

And it’s funny too, especially once Rhino the hamster turns up. It’s not the greatest comedy ever made (and the level of praise attributed to Rhino in some quarters may have taken it too far), but it’s genial enough and elicited a few decent laughs. It even had me getting a little emotional at the end, which isn’t something I ever expected to feel about a film starring Miley Cyrus and a dog made out of polygons.

Despite being computer-generated and 3D, there are attempts to add a painterly look to the film — brushstrokes, pastel colours, that kind of thing. It works rather well when seen in isolation in backgrounds, some of the big wide shots, etc; but the obviously-CG main elements jar against it, the painterly style not extending to the characters or main environments fully enough for it to gel. Especially when the apparently-flat paint-styled backgrounds begin to move in three dimensions (for instance, as the camera pushes into scenery, so that trees/buildings move relative to road/field/hills/streets), it becomes a little weird. An interesting experiment, but not a wholly successful one I think. Something like Ratatouille’s attempt at softening CG animation’s usual hard crispness was more effective. 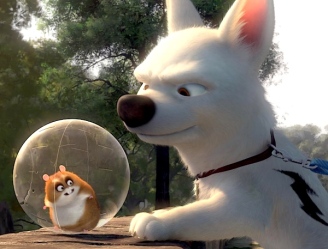 It would be easy to dismiss Bolt as part of Disney’s CG folly, especially as it stars Miley Cyrus and is immediately followed by their return to 2D animation, but I think that would be a mistake. It’s a fast-paced and fun adventure, with accurately-captured animals meaning it’s especially likely to appeal to dog lovers. Disney’s next golden era just might begin here.