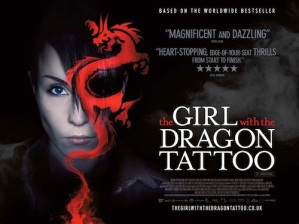 From the same production company that brought us the popular Swedish Wallander series comes an adaptation of the other apparent cornerstone of modern Scandinavian crime, The Girl with the Dragon Tattoo, the first entry in Stieg Larsson’s best-selling Millennium Trilogy.

Investigative journalist Mikael Blomkvist is hired by the head of the sprawling, filthy rich Vanger family to look into the disappearance of his favourite niece from an isolated and, at the time, inaccessible island. A (possible) murder in an isolated country mansion full of rich suspects? So far so Christie… except this crime happened over 40 years ago. Almost ironically, it’s this last fact that helps make the tale ever so modern: Blomkvist uses the Internet to death, enlarging and animating old photos, researching family members and connected cases, and accidentally roping in hacker Lisbeth Salander, the titular girl. 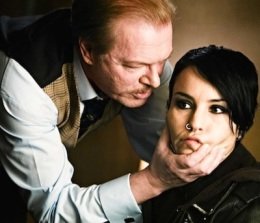 The original title translates as Men Who Hate Women, which is certainly very apt. The subject matter is grim and dark; horribly plausible, in fact. It’s unwaveringly depicted with some brutal, hard-to-watch scenes. They’re not exploitative though, as a lesser film merrily would be, and that makes them appropriate to the tale being told. Subplots about the two leads support the themes underpinning the main investigation — both about abuses of power, in different ways — justifying their apparent tangentiality, and consequently the film’s length.

I believe the title was changed by the US publisher, who felt such a name wouldn’t sell the book as a thriller to English-speaking readers. They were probably right, but it has an important side effect: it shifts the emphasis away from the story and its themes and onto Salander, arguably more so than is fair. I’m not entirely sure I see what all the fuss is about when it comes to Salander. She’s a good character and very well played by Noomi Rapace, who always looks so sweet and innocent in her normal persona, but I guess I’ve missed what makes the character so exceptional. Perhaps she’s just the victim of hype, too many other reviews telling me how incontrovertibly brilliant she is.

Despite the modern stylings, dark themes and attention-grabbing characters, much of the film unfolds as a procedural whodunnit like, for instance, the Wallanders, complete with piles of red herrings and last-minute twists. This is probably why the book has sold so well and the film has taken over $100 million worldwide: it tickles the same nerves as all those ever-popular TV police dramas. Indeed, this adaptation is rooted in a television miniseries (an extended version exists as two 90-minute TV episodes) but it doesn’t look like it: it’s quite beautifully shot; not showy or stylised, but there are some lovely shots of scenery in particular.

Naturally that popularity means an English-language version is on the way — “American version” is the standard designation, but despite Oscar-robbed American David Fincher directing and Oscar-winning American Steven Zaillian adapting, it’s being produced by BBC Films with an international cast: Brit Daniel Craig as Blomkvist, American Rooney Mara as an even more extreme-looking Salander, Canadian Christopher Plummer as the Vanger patriarch, and even a genuine Swede, Stellan Skarsgård, in a key role; not to mention the rest. I’ve long felt (though, it seems, forgot to mention it during my David Fincher Week) that Fincher’s films have thus far alternated between “good” and “great”, in that order, and that the merely “good” ones are (arguably) on a steady upward curve.

With Dragon Tattoo featuring material that seems ideally suited to the director who gave us Se7en, Zodiac and The Social Network, his remake may prove to be the point where the “good” curve reaches the “great” line. Or he might balls it up — apparently they’re changing the ending, and unless they’ve come up with something very good that could be a bad misstep. Only time will tell.

For Dragon Tattoo’s legions of fans, this version will be tough to beat — though I’d wager if anyone can top it, Fincher can. For now, though, there’s this, a well-made dark thriller, which serves primarily as a mystery but also supplies themes and characters that may offer further contemplation.

This time next week, The Girl Who Played With Fire. Hopefully.

The Girl with the Dragon Tattoo merited an honourable mention on my list of The Best Films I Saw For the First Time in 2011, which can be read in full here.