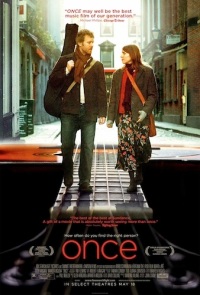 Once is a very modern indie musical. And I mean indie as in “indie film”, not “indie music”. Lord save us from a musical of indie music.

The musical bit is both traditional and revisionist. The songs still reveal character and emotion, in the way they do in all good musicals, but here the lead characters are a pair of musicians and the songs are (mostly) placed in a plausible context — strumming on the bus, writing lyrics to a tune, recording in a studio, that kind of thing. The songs are of a folky variety. I don’t know how essential it is to like this style of music to enjoy the film — there are quite a few songs, but by placing them in a real world way Carney largely avoids the allegations of implausibility that are usually levelled at musicals. Perhaps this is a musical for the non-musical-fan, then. Personally I liked them enough to buy the soundtrack… but I suppose that’s meaningless if you don’t know the kind of music I like.

The visual aesthetic of the film is even more unlike your standard musical, shot handheld and digital video-y, it could almost pass itself off as a documentary. Carney and his cast don’t overdo the storytelling either, allowing looks and scenes and montage to do the work when others would’ve plumped for expositional dialogue. One of the film’s big reveals isn’t even in English, and nor is it subtitled, making for a “whisper at the end of Lost in Translation” moment (except you can hear this one, so a translation can be found online if you want to know). 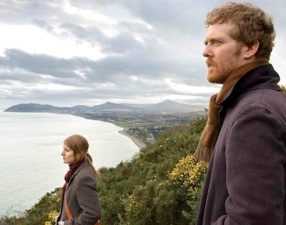 It’s a testament to the strength of the lead performances and the story they create that it’s not until the end credits roll you realise you never even knew their names.

The most ready comparison is Before Sunrise — “Before Sunrise with songs” might be the pat way to describe it. It’s not a rip-off — not Before Sunrise: The Musical — but there are plenty of similarities in terms of style and content. It didn’t quite click with me in the way that Linklater’s film did, perhaps because I’m not a musician. Equally that’s placing unfair weight on Once: there’s absolutely no need to be a musician to enjoy it; it’s a solid romantic drama, a very real-world (as opposed to rom-com) romance.