I may have mentioned iCheckMovies.com before, but in case not, it’s a fun (if you’re someone like me) site where you can tick off movies you’ve seen. I guess that’s in the name. It started out wholly based around “best ever” lists but has since widened to include all movies (and much TV). The focus remains on completing / seeing how well you’re doing on various lists, it’s just now you can tick anything — which is handier in my opinion, especially as some titles have a tendency to yo-yo on and off lists.

Anyway, one of the lists they have — amongst the usual suspects like the IMDb Top 250 and They Shoot Pictures’ Top 1000 and the Empire 500 — is the iCheckMovies Most Checked. It does what it says on the tin: these are the movies checked by the most people. These are the movies everybody’s seen. 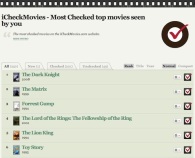 Even if it does only reflect what a certain demographic have seen, it’s still fun (if you’re someone like me) to see what films everyone’s seen except you. So in that spirit, here are the top ten films everyone else has seen that I haven’t (with their current place on the overall list in brackets). 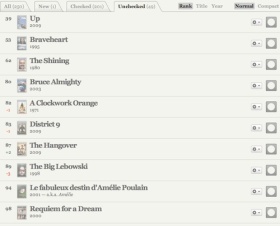 And I own six of those too.

Do feel free to go find out what you’re a social pariah for missing out on here. Report back in the comments, if you like.

It’s been over a year since I first posted this, and in that time a few things have shifted around on this list. I thought I may as well offer an update.

In terms of my unseen films (deep breath, this’ll get long…)

What I can also see is I’ve not watched a single one of these in the last 14 months, despite now owning seven — if you include A Bug’s Life, eight. Story of my life…