Assault on Precinct 13, it has always seemed to me, is an acclaimed cult classic of the action genre. I could probably find some references to support this — I know it’s on Tarantino’s list of the top seven exploitation movies, for starters — but for speed let’s just assume I’m right. Thing is, on initial impressions at least, I didn’t quite get that. It felt like an unexceptional low-budget ’70s exploitation B-picture to me.

It’s quite possible — indeed, it’s pretty much certain — that it is a low-budget ’70s exploitation B-picture, but one that for some reason stands above the others. I’ve not exactly seen many to compare. It’s reputation may also, I wager, be nostalgia based: what looked shocking or exciting or innovative to impressionable young audiences a few decades ago may not work quite the same now, when even cheap direct-to-DVD movies can afford some half decent CGI and the occasional actor you’ve actually heard of, never mind the feats a theatrical B-grade movie might pull off.

Anyway, back to the film in hand. It’s the last night at a rundown old police station. It’s manned by a skeleton staff because technically it doesn’t close ’til morning, but the phones have been disconnected and most of the equipment’s been taken, including the weapons. A prison transport arrives for a reason I can’t remember, wanting to put its handful of prisoners in the station’s cells. Then a man runs in the front door. No one in the police station ever finds out why he’s come (we do though, but I won’t say in case you’ve never seen the film), but following close behind him are 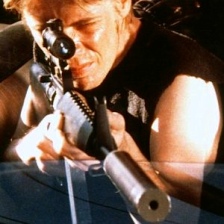 a huge gang who lay siege to the cut-off station. So the cops and the prisoners must work together to fend them off.

Such is the plot, basically. Obviously there’s more to it, but I’m not aiming to explain the whole thing — the siege is the key element (note the “assault on” bit of the title) but doesn’t start until quite far into the film, hence the stretch of plot. The first third-ish of the film, where the ragtag group of people wind up in the station, is a bit random, but that’s also kind of the point: this group of people stand up to protect one man, even though they have no idea why he’s there. Very moving. Nonetheless, some of the machinations of the plot are a tad comical, like when the aforementioned man chases the gang: all but one of them run off for no good reason, letting him kill the one he’s after — by sheer luck, it seems — before they all come back to chase after him. Um, what?

The film is ostensibly an action movie, of which there is certainly some. The halfway shoot-out is an almost comedically repetitive symphony of bullet-ridden violence. Deliberately comedic, I wonder, or just laughable? By contrast, the finale feels rather short. Maybe it was to gloss over the implausible plan our heroes concoct, but there are a few jumps in there that feel a tad unnatural, like something’s been cut out. And how the cop is supposed to have made the impossible shot through all that smoke I don’t know.

I say “ostensibly an action movie” because there’s actually a fair dose of horror stylings in there too. The gang are real enough in theory, but they’re presented as a faceless hoard,

performing voodoo-esque rituals, coming and going as if by magic, doing things our heroes can’t necessarily explain, attacking in almost random waves… They feel almost supernatural; one might go so far as to say they play more like zombies than an organised criminal force. It’s no surprise that Carpenter would next helm Halloween, a seminal horror movie if ever there was one, and later cement his reputation as a horror director with the likes of The Thing.

There’s a couple of good deliberately comic bits too, almost all of them coming from Napoleon, the main criminal, though they’re only good in a slightly cheesy ’70s action B-movie kinda way. Laurie Zimmer’s female lead, Leigh, is possibly the next best (or just best, but next-most-memorable) member of the cast. She’s only a secretary, but she’s a strong woman who holds her own, despite being shot in the arm. Seems it might be a shame her acting career was so short. I should probably also note that the main cop character is black and the main criminal is white, which I imagine was revolutionary in the ’70s. To be honest, it would probably go against the norm today — note how the remake reverted to (stereo)type.

More praiseful reviewers than I have described Carpenter’s film as “rough, raw” and “lean, mean, genre-defying”, which is true; others have noted that it’s “largely composed of borrowed pieces”, which might be right; and still others say there’s “no mistaking the modern racial and sexual politics encoded in the distinctly western elements”, which I also more-or-less agree with.

And another says that, “like Night of the Living Dead, it offers a protagonist who is black, a morality that is grey, and social commentary in the guise of horror”. Neat. (All these quotes were quickly nabbed from Rotten Tomatoes; full attribution there.)

I can see why someone felt this was ripe for a remake. Critics soundly trashed that as “not as good as the original”, and that may well be the case; but maybe it’s just that a ’00s action B-movie couldn’t withstand the nostalgia attached to its ’70s counterpart. Or maybe this original represented something for its era that isn’t as present today — after all, most if not all of the most groundbreaking films of all time can/will look nothingy if watched many decades later without the appropriate context.

I did quite like Assault on Precinct 13 but, as has probably been made clear, didn’t quite identify with the love many hold for it. I suspect you had to be there.

See also my comparison of this and the 2005 remake here.