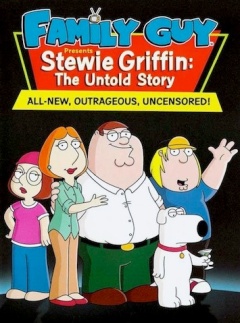 Following Family Guy’s cancellation after three seasons, it somehow found a new lease of life on DVD, posting surprising sales in what was, I suppose, the early years of the format’s mass take-off. This led to a rethink by Fox and a belated (as in, several years later) renewal for the animated sitcom. This story was originally intended to form a three-part opener to the first season back, but Fox wanted a direct-to-DVD movie too — presumably to capitalise financially on that previous success — and so those three episodes were retooled into a feature.

We know how this can turn out.

And it does feel like three Family Guy episodes stitched together. Much like that other stitched-together-from-three-animated-TV-episodes movie, Star Wars: The Clone Wars, the events of part one (or the first twenty-odd minutes) seem entirely separated from the two-parter that makes up the back hour. Fortunately the Family Guy team seem to have more common sense than their Lucasfilm counterparts, choosing to link back round to the start for their film’s climax, tying it all together after all. Nice work.

The plot is more or less suitably movieised — despite that first-part almost-disjoint, it’s a more-epic-than-usual tale of Stewie’s origins (sort of) — though it seems slightly held back by its genesis as three TV episodes 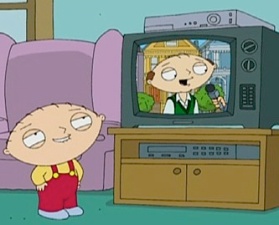 and the need for it ultimately to be split back up (it was broadcast, censored, as a three-parter at the end of the comeback season). With subplots that begin and end within each half-hour(-ish) segment, it plays about as well as watching a three-parter back to back… which is more than can be said for that Star Wars film. Consequently, it also feels just like regular Family Guy — the same level of humour, basically — though it seemed to me like there were more scatological jokes than normal, some of them going on too long as well. If you’re not a regular viewer of the series, references to running jokes will pass you by; equally, the nature of its humour, often based in cultural references, means that some bits that are obviously jokes will elicit no more than bafflement from a non-versed viewer. Still, there’s plenty of more universal humour too. It relies on the usual style of numerous non sequitur flashbacks and asides. Which, again, is fine — that’s their style; it would be wrong to be anything else.

The need to turn three TV-aimed episodes into a movie — and, somewhat ironically, back again afterwards — does have a few effects on proceedings. Various bits had to be cut for the broadcast version, most for the silly technicalities of US TV rules — the fact the DVD is rated 15 over here, 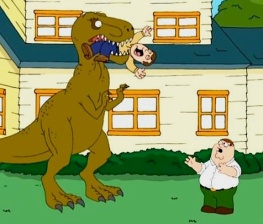 the same as the series normally is, shows how arbitrary US regulations are. It feels like there are a few more jokes that are slightly dirtier than normal and there are a few extra swear words, but they consciously didn’t go OTT with them and, thankfully, it shows. But actually, most of the stuff that’s cut (as detailed on the commentary or in full here) is for those daft US rules; so, stuff that just steps over a certain line; stuff that, to be honest, most Americans wouldn’t even notice.

Also, contractually the film had to make a certain length, so there’s some conscious padding in there — though, as they note on the commentary, they did their best to make the padding funny too. Take the intermission, for instance, which features just voices over a black “Intermission” screen: dirt cheap to animate (what with there being no animation) but it both adds a bit to the running time and smoothes the jump between parts two and three.

I don’t know how much I’ve reviewed the film and how much shared some behind-the-scenes tidbits here, but if you like Family Guy… well, you’ve probably already seen this (it’s been out, what, six years? I’m behind here), and if you don’t like it there’s nothing to change your mind. 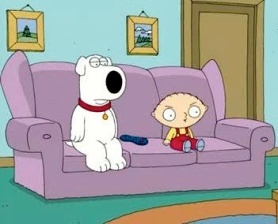 And if you’ve always been curious but never given it a go, don’t start here — I don’t think it would be incomprehensible to first-time viewers, but I don’t think it’s the best introduction to the series either, and it probably makes more sense if you know the characters a bit.