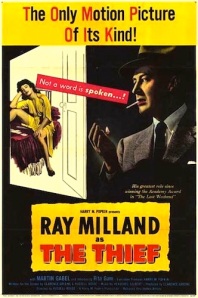 Ray Milland stars as Dr. Allan Fields, a nuclear physicist working at the United States Atomic Energy Commission, who is photographing secret files and passing them to The Other Side, until something goes wrong and the authorities are on his tail. But that’s almost beside the point, because if The Thief is known for anything it’s for its dialogue — as the poster proclaims, “not a word is spoken…!”

At some points in cinema history that would go without saying, obviously, but this is 25 years after the first talkie, so it’s being Experimental. It’s not silent film styled either, unlike recent attempts to recreate that early era like La Antena or 2011 Cannes competitor (and Palm Dog winner*) The Artist. There’s a minimal use of text here too — certainly no intertitles, and only a couple of printed pages to help us follow the story. I’d argue most of those aren’t needed either. They all crop up fairly late on, by which point we’ve grown accustomed to interpreting what we’re seeing without the help of words, so it’s almost a shame Rouse resorts to them.

It’s credit to Rouse’s direction and performances, particularly by Ray Milland, that we can follow what we’re seeing without more text. That said, it is a fairly straightforward and archetypal story — while it demonstrates that you can tell a story without dialogue, it might leave one wondering about the possibilities for telling a wholly original or truly complex story that way. 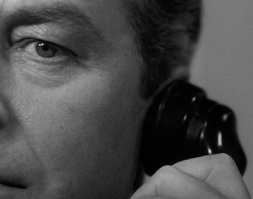 Obviously we can look back to the silent cinema for that kind of thing, but while that era could probably still teach many filmmakers something about visual storytelling, it’s hard to deny that the advent of synchronised sound adds a helluva lot to the ability of film — if it didn’t, it wouldn’t have taken over so fast and remained virtually 100% dominant for the last 80+ years.

But anyway. Milland conveys the necessary emotions through his face and actions alone. Rouse manipulates the plot to suit a little showcasing of his direction: mostly it’s a tale of espionage, meaning tense chase sequences that are often only underscored by music in regular films anyway, but the second half presents an aside in which an alluring Rita Gam — credited only as The Girl — seduces Miland as he hides out in a New York apartment. “Look,” Rouse seems to say, “we could do a romance too.”

It’s unusual that the hero is working for the other lot. Sure, there are plenty of murderers and assorted other crooks as heroes in film noir, but here we’re expected to identify with a Commie traitor? How very dare they! 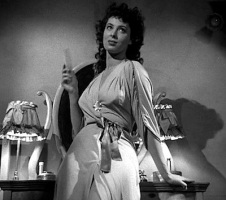 Perhaps this is why the villains are never explicitly named. But they’re definitely not American! Tsk tsk. More crucially, it’s a bit slow at times — it seems to take longer to explain things when stuck doing them through visuals alone. That said, it could probably have survived a speedier approach even doing what it does — perhaps, then, Rouse is playing for time: the film only runs 87 minutes in spite of its pace.

The Thief tells its story and relays the thoughts and feelings of its lead character effectively, even if that story is a bit simplistic and even if there are times when it’s clearly jumping through a hoop or two to make sure no dialogue is required. The lack of dialogue is certainly a gimmick, albeit one that — more often than not — works. It’s an interesting film, I’ll certainly give it that.

* I didn’t know they had a Palm Dog award until this. That’s… well, I think that’s awesome; as the Americans like to say, your mileage may vary.