Michael Caine killing hoodies. How great does that sound? As a film premise, that’s awesome. If it doesn’t get you excited about seeing this movie, then what kind of film fan are you, eh?

A mentally mature one, probably. But hush, don’t spoil our fun — those of us who may occasionally hanker for a morally simple form of voyeuristic vigilante justice want to see Sir Michael shooting yobs who definitely Have It Coming. Harry Brown delivers this wonderfully.

Politically and morally, in a real-world sense, Harry’s actions are as questionable as those in any vigilante movie. And yet, for that, it’s hard to avoid the sense that he’s bloody well right. Even as someone against capital punishment, against unnecessarily arming the police, and so on, there’s still satisfaction in witnessing Harry carry out his revenge; justice. When police raids kick off a violent riot at the climax, there’s the thought that Harry was dealing with this more effectively; that cutting the yobs down in a swathe of machine-gun fire might be the best solution for the future of humanity.

Which in some ways is quite a chilling way to feel. I’ll be buying the Daily Mail and watching Sky News next.

Barber’s film tries to dress itself up as plausible social drama, mind. Of course it’s more revenge fantasy wish-fulfilment, but perhaps the veneer of believability makes what happens even more satisfying. The bright side of that is the film manages to be a bit more than just a celebration of violence. It takes the moral question head on… sort of. “Where does it stop?” asks one character, once Harry’s dispatched with all but one of the main bastards who need dispatching. There’s a twist, which is neatly built up and I didn’t see coming so I won’t spoil, and it does make you briefly question, “where does it stop?” And that’s why vigilantism, or revenge in any way, is an ineffective solution in the real world. But this is a film and there comes a solution, so that’s OK. As with the rest, it is deserved, and it’s difficult not to think, “well, Harry was right, actually”.

Caine gives a stunning performance as the titular pensioner. The film bothers to invest you in the character: a man shattered by the death of his wife, the murder of his only friend, the past loss of a daughter, and buried experiences serving as a Marine in Northern Ireland. The evolution from quiet, downtrodden everyman to skilled vigilante is plausibly created — or, at least, plausibly enough. It’s to the credit of screenwriter Gary Young that he doesn’t dive to the vengeance action as soon as possible; to the credit of Barber that he’s not afraid to let the early scenes play out slowly, often with lots of silence, conveying the reality of the lonely pensioner.

Whatever you may think of the revenge thriller it turns into, I think it’s hard to deny these early scenes have a realism and power. It is, of course, to the credit of Caine that he performs all this flawlessly. Oh yes, he’s (to quote another review) “the king of cool” when blowing away the scum that surround him, but before that he’s an affecting old gent, abandoned by the world.

Comparisons with Death Wish should probably be made, because yes, they do have much in common. Harry Brown is more skilled, though: Caine out-acts Charles Bronson at every turn, and Barber clearly is a director of not inconsiderable talent, something Michael Winner patently is not. The structure is the same, really — motivation from a brutal attack on the closest person to our lead character; spurred by his general feeling of useless ineffectiveness in the face of the modern, violent world; a long, steady slide downhill before our hero turns to vigilantism; his struggle to pull off the attacks — he’s no superman, they don’t go perfectly. But Harry Brown feels superior. Perhaps because it’s more vital to our times — this is a situation occurring in our country right now, not a somewhat abstract rape and murder. Not that those aren’t foul crimes, but Harry Brown has more of a relevant social conscious. 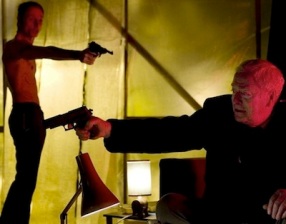 The counter to that would be that a murder spree may be viscerally satisfying but isn’t a real-world solution, so this is just as useless at relevancy as Death Wish.

One might also argue that Harry Brown loses Death Wish’s strongest aspect: Bronson never gets the men who attacked his family, only able to exact vengeance on criminals he happens across; Caine, on the other hand, gets to attack those responsible… and a couple of others who are peripherally connected and at least as deserving of his bullets. It’s more narratively satisfying to get revenge on the actual perpetrators, but not always as realistic. While that is a strength in Death Wish, it doesn’t make Harry Brown a lesser film for not following the same path. This is a different story, despite the similarities — it’s set in a more confined area, with more specific problems, and the murder is the catalyst for Caine’s character to take action against the people who are perpetrating all the crime, not just the particular one that galvanises him.

This is the kind of movie that can polarise an audience. For one thing there’s lurid and extreme language and violence, and lots of it — this well earns its 18 — but it is, largely, justified by the context. Beyond that, there are a lot of political and moral implications raised by the film’s realist tone.