Dear fans of Firefly and Serenity,

[The following was all irrelevant soon after I posted it, never mind now in 2015. But hey-ho, the repostathon rolls on…]

In case you’ve not heard of it, I just want to quickly draw your attention to Browncoats: Redemption, a fan film about a bunch of original characters in the ‘verse that takes place in the wake of the events of Serenity. What makes this one notable is that it’s been officially sanctioned by creator Joss Whedon and the appropriate Firefly/Serenity rightsholders to be sold on DVD and Blu-ray in aid of charity. 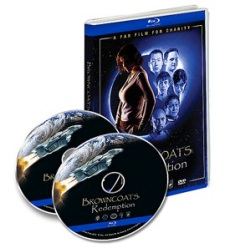 But only until September 1st, which (as the handy countdown on the website tells us) means it will only ever be available for order for another 29 hours*.

I’d meant to review the film sooner to give it a proper push, but me being me I only just watched it. I’ll still aim to get a review up sometime, obviously, but for what it’s worth I’ll be giving it 2 out of 5. Hardly a glowing promotion I know, but I’m scoring this next to all the other films I’ve watched and, honestly, it’s a fan film and it plays like one. That said, as examples go it’s a pretty well-made one. Though the acting, screenplay and direction would be kindly described as “well-meaning”, some of the production values are surprisingly good: there’s a decent spaceship set, well-realised location work, solid costumes, decent fight choreography, professional music, some good-quality CGI, and so on. It’s no Serenity 2, and considering the “proper movie” quality of some zero-budget films (like, say, Primer or El Mariachi (both of which cost less)) it’s obviously a labour of love rather than of emerging talent. But for die-hard, sympathetic fans of Whedon’s series, it’s a passable little trip back to the ‘verse. Full marks for effort, at least.

Plus, if you’re interested in this kind of thing, the DVD & Blu-ray versions come with a host of extras: an audio commentary by the writer/director/producer, the best part of an hour on the making of Redemption, over an hour and a half of interviews with cast and crew from Firefly and Serenity, and a full soundtrack CD.

More importantly than all of that, and why I’m mentioning it despite my rating, is that all profits go to five charities supported by Firefly/Serenity cast & crew: Equality Now, Kids Need to Read, the Dyslexia Foundation, the Al Wooten Jr. Heritage Center, and the Marine Corps Law Enforcement Foundation. With just 29 hours left to be able to own the film (unless you’re attending Dragon*Con, anyway), I thought that was worth a mention.

* at the time of posting, hence why this round-up is about 24 hours earlier than normal.

Now back to your regularly scheduled monthly round-up…

After that, I’ll just get on with it. Should I watch anything else in the next 24 hours I’ll sneak it on the end later.

September marks the final third of the year. With under a quarter of films to go, that’s not too shabby… even if I’m still not getting very far with posting reviews.

But hey, tomorrow is another day…