Baltimore, the week between Christmas and New Year, 1959: the lives of six friends in the run-up to one of them getting married, during which period they spend surprisingly little time at the titular establishment.

The first feature from writer-director Levinson (Young Sherlock Holmes, Good Morning Vietnam, Rain Man, etc), Diner stars a pre-Angel Heart Mickey Rourke, pre-Footloose Kevin Bacon, pre-Police Academy Steve Guttenberg, and a few others who, let’s be honest, probably aren’t recognisable enough (to me anyway) to be pre-anything (including amongst the main friends Home Alone’s Daniel Stern and Superman: The Animated Series’s Superman, Tim Daly). That doesn’t really shed any light on what the film is like, but in retrospect it looks like an All-Star Cast.

What Diner is like is a series of vignettes. There’s a loose plot holding it all together — the aforementioned wedding — but it all plays like a series of connected subplots. It’s a “slice of life” kind of film, rather than a “big story” kinda film. That works for some viewers and not for others. For me, I enjoyed some of it and some of the amusing moments, but it all felt ultimately empty. 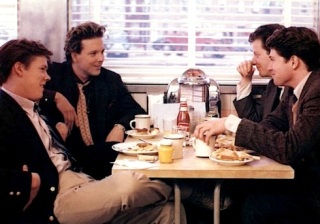 There are no big turning points or revelations or developments for any of these characters. One is in trouble thanks to deep gambling debts, but there’s the equivalent of a magic wand that wipes them all out; another is permanently drunk with serious family issues, but neither of those go anywhere; another pines for a girl he barely sees and has never been with — well, except for one significant night — but by the end I’m not sure if they were going to get together or leave it be or… what. Similar things could be said for all the others.

Do we need to see big life-defining turning points for all these guys, or even any of them? It’s not plausible they’d all happen in the same week anyway, except on the rare occasion there’s a period of time that’s significant for everyone — y’know, leaving school, or a major world-changing incident; those things that can automatically define the life of everyone involved, if only for a while. Here, you might say it’s marriage, but it isn’t — the fact we never see the bride’s face is probably symbolic of her ultimate unimportance to the guys’ friendship. 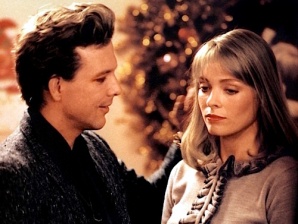 Like I said, this kind of storytelling works for some viewers and not for others. If it hadn’t been for the pat ending of that gambling debt plot, or the non-development of some other promising threads, maybe I would have liked it more. As it stands, Diner certainly has its moments, but maybe not enough of them for me.